Kolkata Knight Riders have had a difficult season. The team have been inconsistent with their performances. Due to this KKR have made constant changes to their playing XI, with very few players being able to hold on to the spot in the line-up. 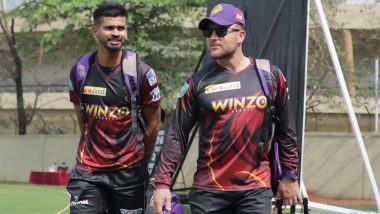 Kolkata Knight Riders returned to winning ways last night as they defeated Mumbai Indians by 52 runs at the DY Patil Stadium. This win saw KKR keep their playoff hopes alive as they moved to within four points of the top four. In the post-match conference, skipper Shreyas Iyer revealed that the franchise CEO, Venky Mysore, is also involved in picking the playing XI for a particular game. KKR Bowlers Outshine Jasprit Bumrah As Mumbai Indians Go Down by 52 Runs in IPL 2022 Clash.

Kolkata Knight Riders have had a difficult season. The team have been inconsistent with their performances. Due to this KKR have made constant changes to their playing XI, with very few players being able to hold on to the spot in the line-up. MI vs KKR Stat Highlights, IPL 2022: Clinical Knights Keep Slender Playoff Hopes Alive With Thumping Win Over Mumbai Indians.

When asked about the regular changes in the playing XI, Shreyas Iyer said: 'It is really difficult (to tell players about axings). Coach and at times, CEO is also obviously involved in team selections. Each and every player takes it well, and they have put in their best efforts.'

KKR still have a slim chance of making it to the next round and Shreyas Iyer is aiming that his team can build on this momentum. 'The win was comprehensive, and when I spoke to the players, they were pumped up to win the game today. I'm not satisfied (totally) but want to maintain this.' he said.

'Very pleased because after losing the last game by a big margin, feels good to come back and win by a big margin is nice. We had a nice start in the powerplay and Venky targeted bowlers well. I personally felt that it wasn't easy to start for a new batter. When we went into bowl, the plan was to hit the right areas and not give room.' the KKR skipper added.

The two-time champions are seventh in the table with 10 points. They have two games left to play in the competition and need to win both of them to have any hopes of making it to the playoffs.

(The above story first appeared on LatestLY on May 10, 2022 11:22 AM IST. For more news and updates on politics, world, sports, entertainment and lifestyle, log on to our website latestly.com).