Batting first, Knight Riders could only managed 165/9 despite a great start. But they turned up big time with the ball as they bundled Mumbai Indians for just 113 runs in just 17.3 overs. 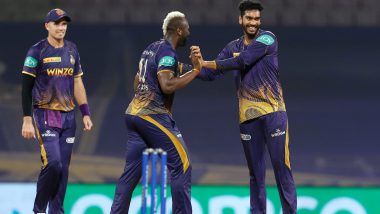 Kolkata Knight Riders bowlers came good and the team too played as a unit to defeat Mumbai Indians by 52 runs in IPL 2022 on Monday, May 9. The Knight Riders, batted first and after a fiery start, they collapsed largely due to Jasprit Bumrah's sensational fifer to settle for a below-par total. With the ball in hand, they capitalised on Mumbai's batting woes to throttle their run chase, eventually carving out a memorable victory. It was also their first league double over the five-time champs since 2014. This result also enables KKR stay alive in the IPL 2022 playoff race. Rohit Sharma Dismissal: Ultra-Edge Shows Spike Even Before Ball Touches Bat, Netizens React

KKR made five changes tonight, bringing in some faces who were responsible for their good start to the season. Venkatesh Iyer, who came in to the team, returned to form with a form that fans saw him have in the second half of last season. He smashed 43 runs off 24 deliveries, helping KKR achieve their highest opening stand and best powerplay score this season. Rahane played second fiddle but looked good for his 25 as well. Nitish Rana's 43 and Rinku Singh's 23* were Kolkata's only saving grace in the middle-order as the rest were blown apart by Bumrah, who scalped five wickets for just 10 runs in his four overs. After 100 runs of the first 10 overs, KKR managed just 65 of the next 10 to end up with 165/9.

KKR bowlers surprised Mumbai's batting in the latter's run chase. The Knight Riders had their bit of luck up front when Rohit Sharma was given out under controversial circumstances, with the ball not even touching the bat and the Ultra-Edge showing a spike. Barring that, it was KKR all the way. Pat Cummins made a strong statement on his return to the playing XI with figures of 3/22 an so did Varun Chakaravarthy, who snared the big wicket of Tim David and gave 22 runs in four overs. Andre Russell also took two wickets and Sunil Narine and Tim Southee had one apiece. Suryakumar Yadav, Mumbai Indians Star, Ruled Out of Remainder of IPL 2022 With Muscle Injury

#Jasprit Bumrah got his maiden five-wicket haul in IPL and T20s.

#He also bowled the fifth-best This is the 5th best bowling figure in IPL history - Bumrah: 5/10(4).

#It was also their first 50-run stand for the openers

#KKR's also had their best powerplay score this season- 64/1

KKR would now aim to maintain this momentum when they face Sunrisers Hyderabad on May 14. Mumbai Indians on the other hand, will hope for a good performance with the bat against defending champions Chennai Super Kings on May 12.

(The above story first appeared on LatestLY on May 10, 2022 12:13 AM IST. For more news and updates on politics, world, sports, entertainment and lifestyle, log on to our website latestly.com).