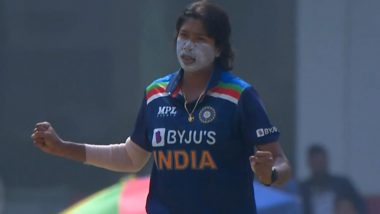 Veteran Indian pacer Jhulan Goswami produced a scintillating spell in the second Women’s ODI against South Africa as India won the game by nine wickets and levelled the series 1-1. Bowling first at the Bharat Ratna Shri Atal Bihari Vajpayee Ekana Cricket Stadium in Lucknow, the right-arm pacer put up an exhibition of high-class fast bowling and proved once again that age is just a number for her. She bowled with hostility and took four crucial wickets. The Proteas team looked entirely clueless against the Chakdaha Express and eventually got bundled out for mere 157 runs. India Women Beat South Africa Women By 9 Wickets in 2nd ODI Match to Level Series.

Notably, Mithali Raj and Co lost the opening clash emphatically by eight wickets and were under the pump coming into this contest. However, Goswami, bowled her heart out and led India’s comeback. Unlike the old days, the 38-year-old might not be able to set the speed gun on fire. However, her accuracy and ability to swing the ball both ways still makes a force to reckon with. Fans were also highly impressed by Goswami’s stellar show as social media got flooded with praises. Have a look! Mithali Raj Sets Record As Cricketer With Longest ODI Career, Second Only To Sachin Tendulkar.

India have bowled South Africa out for 157.

Jhulan Goswami never gets old, still taking wickets for India - at the age of 38, she is running through South Africa - 4 for 42 from 10 overs - 6 wickets in the series - one of the greats of Womens cricket. pic.twitter.com/mwWJG80C2A

Look at that from Jhulan Goswami. Top of off. Could that be any more perfect? #INDvSA pic.twitter.com/lGZDPmDpdx

Leading the team off the field. Jhulan Goswami has 4-plus in an innings for the 9th time in her ODI career, the third most among bowlers in the format. #INDvSA pic.twitter.com/DTGyH2xzTV

Other than the experienced fast bowler, left-arm spinner Rajeshwari Gayakwad scalped three wickets while pacer Mansi Joshi got two wickets. Chasing 158 for victory, the Women in Blue didn’t get off to a great start, with opener Jemimah Rodrigues getting out for nine.

However, Smriti Mandhana joined forces with Punam Raut, and since then, it was one-way traffic. Both batswomen registered unbeaten half-centuries as India comfortably won the game by nine wickets with more than 21 overs to spare. The third WODI takes place at the same venue on March 12 (Friday).

(The above story first appeared on LatestLY on Mar 09, 2021 03:15 PM IST. For more news and updates on politics, world, sports, entertainment and lifestyle, log on to our website latestly.com).