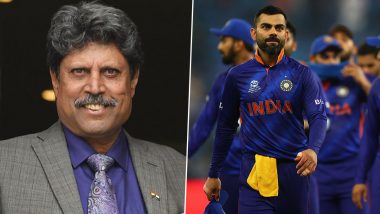 The Indian team's underwhelming performance and early exit from the T20 World Cup 2021 event has left many surprised, angry and disheartened and former World Cup-winning skipper Kapil Dev made a big comment in this regard. Ahead of India's final match against Namibia at the T20 World Cup on Monday, November 9, Kapil Dev stated that some players give more preference to the Indian Premier League over the national side and hence, have not been able to perform according to expectations. New Zealand Qualifies for T20 World Cup 2021 Semi-Finals, Check Out 3 Occasions When the Kiwis Have Proven to be a Stumbling Block for India In Test, ODI & T20I Championships

“When players prioritise IPL over playing for the country, what can we say. Players should take pride in playing for their nation. I don’t know their financial conditions so can’t say much. But I feel that first in line should be the country’s team and then franchises. I’m not saying do not play cricket there (for the franchise), but the responsibility is now on the BCCI to plan its cricket better. To not repeat mistakes we committed in this tournament is the biggest learning for us,” Dev, while speaking to ABP News, said.

He also urged the BCCI to start planning right away for the next T20 World Cup, which is to be played in 2022 and asked the cricket board to not waste time and keep things for later. The legendary all-rounder also added that there should be some duration between the IPL and the World Cup. The Indian cricket team players have been playing non-stop since June this year. Disappointed Indian Cricket Fans Share Funny Memes To Get Over New Zealand’s Win Over Afghanistan, Resulting in India’s Ouster From ICC T20 World Cup 2021

He said, "It’s time to look at the future. You should start planning right away. It’s not that since the World Cup is over, the Indian team’s entire cricket is too. Go and plan. I just feel that there should have been some gap between IPL and the World Cup. But this is certainly there that our player today have a lot of exposure but they could not make the most of it."

After successive defeats to Pakistan and New Zealand, India had to win all their remaining three matches and additionally depend on other results to qualify for the semifinals. New Zealand's win over Afghanistan on Sunday, November 7, marked the end of India's semfinal qualification hopes and now, they would aim to end the tournament on a high with a win over Namibia.

(The above story first appeared on LatestLY on Nov 08, 2021 05:21 PM IST. For more news and updates on politics, world, sports, entertainment and lifestyle, log on to our website latestly.com).