Kevin Pietersen Selects His IPL 2022 ‘Best XI’, Says Umran Malik Should Be in India Team As Soon as Possible 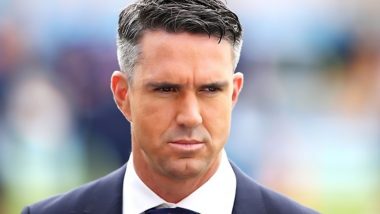 London, May 31: Former England cricketer Kevin Pietersen has picked his 'Best XI' from the Indian Premier League 2022 season, with six Indians -- including the winning team, Gujarat Titans, skipper Hardik Pandya -- figuring in the list. Charismatic England batter Jos Butter, whose herculean effort throughout the IPL 2022 season for Rajasthan Royals went in vain as the Sanju Samson-led side lost tamely in the final at the Narendra Modi Stadium on Sunday, too figures in the list along with Quinton de Kock, David Miller and Australian pace bowler Josh Hazlewood. Ravi Ashwin Signs Jos Buttler's Rajasthan Royals Jersey After IPL 2022 Final (Watch Video).

Pietersen termed Buttler's 863 runs during the course of IPL 2022 as a "truly historic campaign". The England batter finished second in the all-time list of scorers in a single season of the lucrative league. "The second-most runs ever scored in an IPL season, the joint-highest number of centuries, and some spectacular hitting. The best player on the planet," said Pietersen on Betway Insider. On de Kock, who scored 508 runs, Pietersen said, "Hit an unbeaten 140 as he and KL Rahul (Lucknow Super Giants) batted the entire 20 overs unbeaten against KKR (and helped the team enter the IPL playoffs). That innings, combined with some other solid contributions, means he warrants a place in this team."

He termed KL Rahul's season, where the Indian scored 616 runs, as "brilliant". "(Rahul) Only overshadowed by the genius of Buttler. Continues to be one of the most consistent batters across all formats," said Pietersen. The former England cricketer-turned-commentator also said that Hardik Pandya played his captain's role to perfection, scoring 487 runs and taking eight wickets. "A captain's effort. Led from the front throughout, scoring tough runs and taking huge wickets. Most importantly, brilliantly skippered Gujarat Titans to the title in their debut campaign." Hardik Pandya and Gujarat Titans Celebrate IPL 2022 Title With Fans During Victory Bus Parade (Watch Video).

For all-rounder Liam Livingstone, who scored 537 runs and took six wickets for Punjab Kings, Pietersen said, "Hit 34 sixes in 14 innings, second only to Buttler's tally of 45. Hits the ball incredibly hard and scores incredibly quickly. Some player." He also said that David Miller had turned a corner this season by scoring 481 runs. "Miller went to a new level in this competition. He scored double figures in his last 13 innings, which is stunning consistency for a death hitter. That run included a brilliant 94 against CSK and then one of the innings of the IPL, 68 not out to get Gujarat into the final against the Royals." For Ravichandran Ashwin, who scored 191 runs and took 12 wickets, Pietersen said, "Averaging over 27 with the bat and taking 12 wickets is a great effort. That all-round output means that this was a fine campaign."

Pietersen was also mighty impressed with Rahul Tewatia's power-hitting in the slog overs as he left an indelible mark with his 217 runs this season. "Hit two sixes from the final two balls of the innings to earn Gujarat Titans a crucial victory over Punjab Kings early in the competition. Plenty more impressive batting since then means that he is one of the bets death hitters around." Among the others Pietersen included in his Best XI are, pace sensation Umran Malik (22 wickets), this season's Purple Cap winner Yuzvendra Chahal (27 wickets) and Australian pace bowling stalwart Josh Hazlewood (20 wickets). "His (Umran Malik) impressive pace bowling peaked when he bowled the quickest ball of the competition against Delhi Capitals, registering at 157kph. India should be getting him into their team in all formats straight away. A hugely impressive campaign," opined Pietersen.

(The above story first appeared on LatestLY on May 31, 2022 11:06 AM IST. For more news and updates on politics, world, sports, entertainment and lifestyle, log on to our website latestly.com).