KKR Can't Wait For IPL 2020 to Begin, Share Video of Skipper Dinesh Karthik and Other Players Working Out in Gym (See Post) 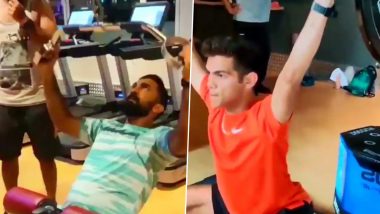 With IPL 2020 scheduled for later this year, all the participating teams have been very much active on their social media accounts, posting regular photos and videos of players to keep fans in anticipation of the new season. The 13th edition of Indian Premier League is scheduled to begin on September 19, 2020, and will be played entirely in the United Arab Emirates (UAE). KKR Squad for IPL 2020 in UAE: Check Updated Players' List of Kolkata Knight Riders Team Led by Dinesh Karthik for Indian Premier League Season 13.

Kolkata Knight Riders recently shared a video showing their excitement for the upcoming IPL edition. In the clip, several players from the KKR squad including Captain Dinesh Karthik could be seen working out in the gym and getting themselves in shape to give their 100 per cent in the new Indian Premier League season.  ‘The fire's 🔥 burning in us! We #CantWait to take the field’ KKR captioned their post. Dinesh Karthik Is the Leader at KKR, Says England’s Limited Overs Captain Eoin Morgan.

The fire's 🔥 burning in us! We #CantWait to take the field 🏟️ #KKR #KolkataKnightRiders #IPL2020 #FeelKorboReelKorbo #feelkaroreelkaro

Kolkata Knight Riders are the second most successful team in the history of Indian Premier League behind Mumbai Indians and Chennai Super Kings. They have won a total of two titles with their last win coming in 2014. With five years since their last triumph, KKR squad will be eager to put an end to that run and get their hands on the trophy once again.

In search of the title, during the 2020 IPL auction, KKR have added the likes of Pat Cummins, Eoin Morgan, Varun Chakaravarthy, Tom Baton, Rahul Tripathi, Chris Green, Nikhil Naik and M Siddharth to their team.

When Kolkata won the title back in 2014, early fixtures of the Indian Premier League was played in the UAE. So the Dinesh Karthik-led side will take hope from that fact and will look to get their hands on the elusive trophy for the third time.

(The above story first appeared on LatestLY on Aug 11, 2020 09:12 PM IST. For more news and updates on politics, world, sports, entertainment and lifestyle, log on to our website latestly.com).