KKR vs SRH IPL 2020 Dream11 Team: Jonny Bairstow, Sunil Narine and Other Key Players You Must Pick in Your Fantasy XI

Dream11 fantasy gaming platform is quite popular among cricket fans who select their teams to win some cash. Team selection with best picks is always a winning formula in Dream11. So, find out our tips and suggestions to pick the best players for your Dream11 team for KKR vs SRH IPL 2020 match. 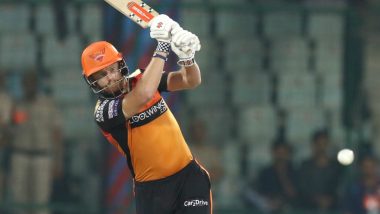 Kolkata Knight Riders will battle it out with Sunrisers Hyderabad in the Match 7 of Dream11 Indian Premier League (IPL) 2020. The game will be played at the Sheikh Zayed Stadium in Abu Dhabi on September 26 (Saturday). Both teams have started their campaign with a defeat and are looking for their first win of the season. David Warner’s SRH lost to Royal Challengers Bangalore in the first game after a shocking middle-order collapse. On the other hand, Dinesh Karthik and Co were completely outplayed by Mumbai Indians and lost the match by 49 runs. KKR vs SRH Preview: 7 Things You Need to Know About Dream11 IPL 2020 Match 8.

Dream11 fantasy gaming platform is quite popular among cricket fans who select their teams to win some cash. Team selection with best picks is always a winning formula in Dream11. So, find out our tips and suggestions to pick the best players for your Dream11 team for KKR vs SRH IPL 2020 match. Kolkata Knight Riders vs Sunrisers Hyderabad, Abu Dhabi Weather, Rain Forecast and Pitch Report.

The England star was the only batsman who got going in SRH’s opening match where he scored a fighting 61. Though his side lost the match, Bairstow showed his ability to perform in spin-friendly tracks. As the veteran cricketer is a wicket-keeper too, he’ll definitely get some stumping and catching chances in Abu Dhabi. All these factors make Bairstow and much-pick in your Dream11 team.

Rashid Khan might not have been able to leave a mark against RCB. However, he can’t be ruled of your Dream11 team for the upcoming game. The leg-spinner is arguably the greatest T20 bowler at the moment, and tracks in UAE will make him even more lethal. Also, one can’t forget his big-hitting abilities in the end overs.

While all the KKR bowlers were taken to cleaners by Rohit Sharma and other MI batsmen, Narine put up an exhibition of high-class spin bowling and gave away just 22 runs in his four overs, taking one wicket in the process. Hence, he undoubtedly deserves a place in your team. Notably, he can also take the opposition by storm with his batting prowess.

No total is big enough till Andre Russell is at the crease. Such is the reputation of the swashbuckling all-rounder. Though, the Caribbean swashbuckler didn’t come well against Mumbai Indian, he should be included in your team owing to his staggering record. Apart from his batting, Russell can also hurt the opposition with the ball in hand.

Touted to be the next big thing in Indian cricket, Gill has piled up a mountain of runs in the past few years and will be determined to do well in IPL too. The right-handed batsman can play spin well which will help him to take on the SRH bowling line-up.

With the dew factor expected to come in play, the toss will be a significant factor in this game. In fact, all the teams have elected to bowl after winning the toss in IPL 2020, and the tradition is likely to follow during this game too.

(The above story first appeared on LatestLY on Sep 26, 2020 07:10 AM IST. For more news and updates on politics, world, sports, entertainment and lifestyle, log on to our website latestly.com).