Mithali Raj Birthday Special: Lesser-Known Facts About the Former India Women's Team Captain You Need To Know As She Turns 40

Mithali Raj had announced her retirement earlier this year. The former Indian women's cricket team captain and one of the legends of the game turns 40 today and on this day, let us take a look at some lesser-known facts about her. 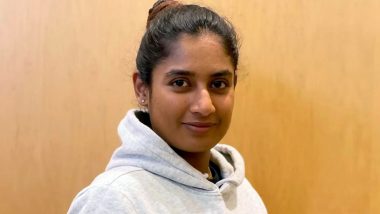 Mithali Dorai Raj is a retired Indian cricket and a former captain of the Indian national women’s cricket team. She is regarded as one of the greatest batters of all time and holds the record to be the highest run-scorer in women's international cricket. Mithali holds a number of records in international cricket, she is the only female cricketer with the most 50s in WODI cricket and more than 7000 runs in Women’s One Day International matches. Virat Kohli Gears Up for India vs Bangladesh ODI Series, Shares Pictures From Training Session

Mithali was born in Rajasthan, India, on December 03, 1982, but due to residing in Hyderabad, in 1996 she joined the Andhra Women’s Cricket team. She made her international debut in 1999 in an ODI match against Ireland and scored her first international century. Mithali played in all three formats Test, ODI, and T20I, she has scored a century in both Test and ODI cricket but fell three runs short of achieving the same in T20I. On June 8, 2022, she announced her retirement from all formats of international cricket.

The cricket legend Mithali Raj also known as the “Lady Tendulkar of Indian Women’s Cricket Team” will be celebrating her 40th birthday on December 03, 2022. So let’s take a look at some of the lesser-known facts about her: Umran Malik Named Replacement for Injured Mohammed Shami in India’s Squad for Bangladesh ODI Series

One of the most iconic cricketers, she has played a big role in the growth of women's cricket in India. She is also a role model to many young and aspiring women cricketers across India.

(The above story first appeared on LatestLY on Dec 03, 2022 11:35 AM IST. For more news and updates on politics, world, sports, entertainment and lifestyle, log on to our website latestly.com).