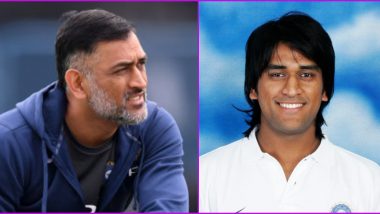 It has been close to a year since we saw MS Dhoni in action. The wicket-keeper batsman and former Indian captain last featured in the semi-final of ICC Cricket World Cup 2019 against New Zealand. Dhoni then opted for a sabbatical and was set to make a comeback on the cricket field in the Indian Premier League 2020 (IPL 2020). Following the coronavirus crisis, IPL 2020 was postponed indefinitely, which meant fans have to wait for some more time to see their favourite cricketer in action. Meanwhile, ICC shared an old photo of Dhoni in their 'Flashback Friday' post, and that made fans miss MSD more. MS Dhoni Enjoys Tractor Ride at His Ranchi Farmhouse Amid COVID-19 Lockdown (Watch Video).

"#FlashbackFriday Which ICC tournament are these headshots from?," tweeted ICC along with old photos of Dhoni and England fast bowler James Anderson. The headshots are from 2006 ICC Champions Trophy which was held in India. For the uninitiated, Australia won that tournament. Most of the fans replied with the correct answer. However, some fans, mostly Dhoni's, were not bothered about the answer and expressed their feelings as they miss the 'captain cool'. Here are some reactions. MS Dhoni Is Addicted to PUBG These Days, He Even Talks About It During His Sleep, Says Wife Sakshi.

In 2006 Champions Trophy, Dhoni scored just 86 runs from three matches including a half-century against West Indies while batting at number six, though India lost that match. Behind the stumps, Dhoni had just one dismissal against his name.

(The above story first appeared on LatestLY on Jun 05, 2020 12:36 PM IST. For more news and updates on politics, world, sports, entertainment and lifestyle, log on to our website latestly.com).