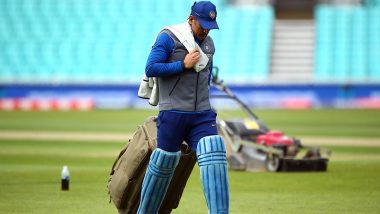 One of the first tributes to Dhoni among the politicians was paid by Tharoor. The articulative Congress lawmaker said he was "sorry to hear" about Dhoni's retirement and was hopeful that he would excel in other sectors of public life in the years to come.

"So sorry to hear that MS Dhoni retired half an hour ago. A true giant of the game, India's finest wicketkeeper-batsman and a transformative captain, he left a stamp on Indian cricket that defined an era. March on, Dhoni ji. There will be other peaks to climb," Tharoor said.

So sorry to hear that #msdhoni retired half an hour ago. A true giant of the game, India's finest wicketkeeper-batsman & a transformative captain, he left a stamp on Indian cricket that defined an era. March on, Dhoniji. There will be other peaks to climb. https://t.co/Y4r8FBCO92

.@msdhoni has mesmerized millions through his unique style of cricket. I hope he will continue to contribute towards strengthening Indian cricket in the times to come. Best wishes for his future endeavours.

'Thank You For The Superb Innings': Sachin Pilot

Best wishes to one of India’s greatest cricketing legends #MSDhoni as he announces his retirement.

'Thank You For The Magic', Tweets Smriti Irani

Thank you for the magic #Dhoni 🙏 pic.twitter.com/BQ8f3cqF9m

Thank you captain fantastic for bringing a smile to one billion Indians. Watching the Indian cricket team play will never be the same without you!

Thank you #MSDhoni for your contributions to Indian Cricket 🇮🇳 @msdhoni pic.twitter.com/4lsEgzaLYu

Bhiwandi MLA Rais Shaikh Thanks Dhoni For Years of Entertainment

Thanks for everything #MSDhoni pic.twitter.com/3vZGhCmr3Y

End of an Era! #MSDhoni pic.twitter.com/bL0Fj2dMmW

The cricketer has retired. But a legend is forever.

The smartest cricketing brain that India produced has retired today!#MSDhoni, Thank you for everything that you have done for the country.

Best wishes for the fearless captain, who gave us the confidence and taught us how to win in difficult situations. #Dhoniretires pic.twitter.com/ML9MqaNwWa

Best wishes to @msdhoni for future ventures. You are a true hero. #MSDhoni pic.twitter.com/BWtzC3cer9

Dhoni had played his last international ODI on July 10, 2019, when India had squared off against New Zealand in the semi-final of the World Cup. Despite a heroic inning by Dhoni, the team had narrowly lost against the Kiwis. Following the loss, Dhoni took a break from international career. According to Chennai Super Kings, the IPL franchise to which he is affiliated, the 39-year-old would be seen in the tournament's edition beginning in the UAE next month.

(The above story first appeared on LatestLY on Aug 15, 2020 08:28 PM IST. For more news and updates on politics, world, sports, entertainment and lifestyle, log on to our website latestly.com).