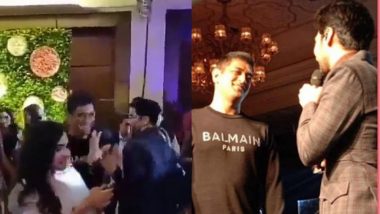 Mahi was so shy that she came only after Aarman ensured that he won’t make MS Dhoni sing the song. After this assurance, did Dhoni join Aarman on the stage with Sakshi Dhoni. Aarman continued singing the song whereas Sakshi and Mahi stood beside him enjoying the melody. The video of the incident went viral on social media. Check out the video below:

MS Dhoni has been spotted practising at the JSCA in Ranchi and has been preparing for the IPL 2020. The former Indian captain was last seen in action for the team during the CWC 2019 which happened in England. Dhoni was last playing against New Zealand where he scored a half-century. However, that wasn't enough to make India win the match. Dhoni was recently dropped from the central contract system by the BCCI and it was widely speculated that the former Indian captain might hang his boots. But he surprised everyone by visiting the JSCA for sweating it out at the nets.

(The above story first appeared on LatestLY on Jan 28, 2020 06:03 PM IST. For more news and updates on politics, world, sports, entertainment and lifestyle, log on to our website latestly.com).