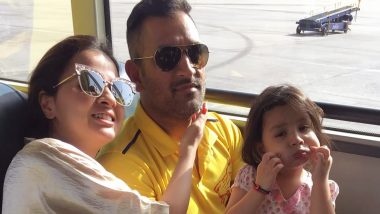 Security at MS Dhoni’s farmhouse in Ranchi has been tightened after Chennai Super Kings (CSK) captain’s daughter received rape threats through social media trolls. The five-year-old was subject to rape threats after CSK lost to Kolkata Knight Riders (KKR) in the Indian Premier League 2020 (IPL 2020). As per a report in the New Indian Express, police have increased the security around Dhoni’s farmhouse were his wife Sakshi and daughter Ziva are staying. Ziva Dhoni Gets Rape Threats on Social Media After MS Dhoni-Led CSK Underperforms in IPL 2020, Netizens Call for Quick Action Against Malicious Cyber Crime.

“Frequency of patrolling near Dhoni’s farmhouse has been increased. We are keeping a close watch on the movement of suspicious elements near the house. In addition to that a squad has also been kept reserve at a certain distance from his farmhouse to deal with any exigency,” Rural SP Naushad Alam was quoted as saying.

Jharkhand State Cricket Association (JSCA) Vice President Ajay Nath Shahdeo called it unfortunate and demanded strict action against anybody who has done it. “Cricket should only be seen as a medium of entertainment, but people are going beyond it, keeping others modesty on stake. This is really unfortunate,” said Ajay.

Chennai Super Kings have been struggling to get going this season with just two wins from seven matches this season. CSK in their latest encounter faced a 37-run defeat against Royal Challengers Bangalore (RCB).

(The above story first appeared on LatestLY on Oct 11, 2020 07:11 PM IST. For more news and updates on politics, world, sports, entertainment and lifestyle, log on to our website latestly.com).