Munaf Patel Birthday Special: 4/29 vs South Africa and Other Brilliant Performances by the World Cup-Winning Pacer 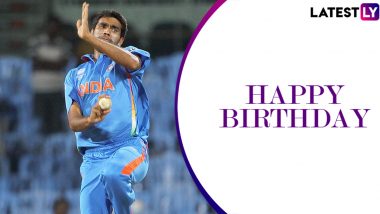 Former Indian pacer Munaf Patel celebrates his 37th birthday on Sunday (July 12). Born in 1983, Patel burst onto the scenes in 2006 with his raw pace and ability to swing the ball. Also, his bowling action was quite similar to that of legendary Australia pacer Glenn McGrath. The right-arm speedster was touted to become one of the best pacers produced by India. However, injuries never allowed him to get a permanent place in the team. Nevertheless, Patel bowled several memorable spells in his career and guided his side to many victories. In fact, he played a key role in guiding India to the 2011 World Cup. As the pacer turns a year older, let’s look at some of his best performances. Munaf Patel Retires: World Cup Winning Indian Fast Bowler Calls It Quits, Feels Satisfied After Hanging Boots on 15-Year-Career!

Patel made a scintillating start to his Test career as he took seven wickets against England on debut. He was soon awarded a place in the ODI team too. The right-arm pacer bowled some impressive spells in his career but never got a long run due to injuries. Speaking of his numbers, Patel has 35 and 86 wickets from 13 Tests and 70 ODIs. Meanwhile, let’s visits some of his best performances.

As mentioned above, Patel bowled a sensational spell on his Test debut. Bowling first, the talismanic pacer made brilliant use of the red cherry and scalped three important wickets. The young pacer added four more wickets in his match tally in the second innings. His efforts proved to be fruitful as India won the game by nine wickets.

4/29 Vs South Africa in Johannesburg

India’s loss looked inevitable in the 2nd ODI of 2011 South Africa Tour as they were bundled out for mere 190 runs while batting first. However, Patel had different ideas. He dismissed opener Hashim Amla early before rattling the stumps of Proteas skipper Graeme Smith. Well, his effort looked all set going in vain as the home team were 188/8 and needed just runs. However, Munaf succumbed the pressure and took two quick wickets and guided India to a memorable win.

4/48 Vs Bangladesh in Dhaka

Another Munaf Patel special came in the opening match of 2011 World Cup. The Dhaka track looked perfect for batting as the Men in Blue scored 370/4 while batting first. However, Patel put on a sensational bowling performance. He first dismissed the dangerous-looking openers Tamim Iqbal and Imrul Kayes. The right-arm pacer took two wickets further as Bangladesh were restricted to 283/9 and lost the encounter by 87 runs.

Patel was certainly at the peak of his prowess during the Kings XI Punjab vs Mumbai Indians match in Indian Premier League (IPL) 2011. Bowling against the likes of Shaun Marsh and Dinesh Karthik, the right-arm pacer didn’t put a foot wrong and bagged his maiden five-wicket haul in IPL. His efforts, however, went in vain as Mumbai Indians lost the game by 76 runs courtesy a miserable batting performance.

(The above story first appeared on LatestLY on Jul 12, 2020 10:00 AM IST. For more news and updates on politics, world, sports, entertainment and lifestyle, log on to our website latestly.com).