With the series being a low-scoring affair, the batting lineups of both these teams need to step up and take responsibility on Monday. The three-match series is currently levelled at 1-1. 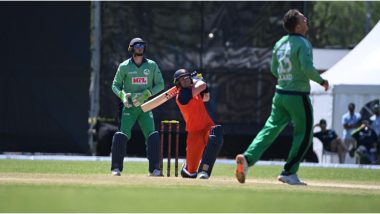 Ireland and Netherlands take on each other in the deciding third ODI of the series, after having won one apiece. The match would be played at the Sportpark Maarschalkerweerd on June 7. Ireland came into the series with a dominant record over the Netherlands but the latter clinched a one-run win riding on a superb bowling effort. Ireland bounced back in the second match to even the series and this match now is of a lot of importance, not just in the context of the series but also in the ICC Cricket World Cup Super League. Ollie Robinson, England Bowler, Suspended From International Cricket For Abusive Tweets

The batting lineups of both these teams need to step up and take responsibility on Monday. For Ireland, former skipper William Porterfield has been in poor form and would want to put that behind and look forward to putting up a good show in the decider. The Netherlands meanwhile, have relied on the resistance shown by the lower order batsmen and would want to perform more as a unit.

How To Watch the Netherlands vs Ireland third ODI, Which TV Channel Will Broadcast it LIVE in India?

The third match of the three-match ODI series between the Netherlands and Ireland would not be broadcasted live in India.

Where to Watch the Netherlands vs Ireland third ODI Match Online in India?

However, fans can enjoy the match on the FanCode app or on the Netherlands crickets' YouTube channel.

(The above story first appeared on LatestLY on Jun 07, 2021 01:06 PM IST. For more news and updates on politics, world, sports, entertainment and lifestyle, log on to our website latestly.com).