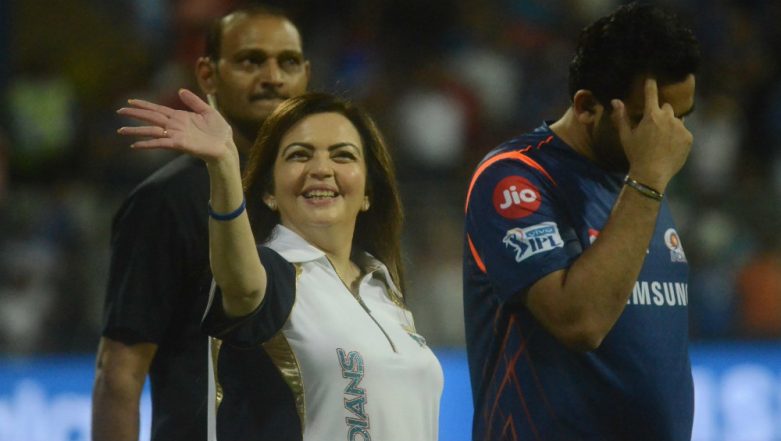 New Delhi, May 13: Mumbai Indians (MI) owner Nita Ambani is known to treat her players as part of the Ambani family and after a tense battle of over 52 days, the Indian Premier League (IPL) was finally won by the Mumbai outfit at the Rajiv Gandhi International Stadium here. And the elated owner thanked son Akash Ambani for the best mother's day gift after MI registered a one-run win over the Chennai Super Kings to lift their fourth title.

IANS learnt that during the team cheer in the dressing room after the game on Sunday night, Nita Ambani thanked son Akash for gifting her a win in the final of the IPL. While the team is coached by an array of stars with Mahela Jayawardene as head coach, Akash is known to ensure that the team management and players get the best possible facilities after he was handed over the managerial reins two years back by his mother. MI beat CSK by 1 run | Mumbai Indians vs Chennai Super Kings Live Cricket Score Final T20 Match.

This after Nita had taken it on herself to look after the team from 2010 and ensured that every player and support staff of the franchise was looked after like one of their own. In fact, after the loss in their opening game against Delhi Capitals, skipper Rohit Sharma and team was invited to the Ambani household to de-stress and bond. MI vs CSK IPL 2019 Final: Mumbai Indians Cricketers Jasprit Bumrah, Lasith Malinga, Ishan Kishan and Other Team Members Celebrate in a Unique Style After Defeating Chennai Super Kings (Watch Video).

Earlier in the night, Lasith Malinga delivered the killer blow as MI defeated bitter rivals CSK in a rip-roaring final. With two runs needed off the final ball, Malinga executed a slower yorker to perfection, trapping Shardul Thakur (2) right in front to send his teammates including skipper Rohit into delirium as Shane Watson, whose breathtaking 80 went in vain, sunk in his seat in the Chennai dugout.

Chasing a modest 150 for victory, Watson, who was dropped on 56 by Rahul Chahar, carried Chennai's hopes with a belligerent 80 off 59 balls, his innings laced with eight fours and four sixes.

But once he was run out off the fourth ball of the final over, it was Sri Lankan Malinga who showed his class to snatch the crown from the defending champions.

In the last five overs, Chennai needed 62 off 30. Watson then hit Malinga for a hattrick of fours to trim the equation to 42 off 24 balls.

There was no stopping the veteran Australian, who scored a hundred to help Chennai win the IPL last time, as he clobbered Krunal Pandya for three back-to-back sixes in the 18th over which costed Mumbai 20 runs. But it wasn't to be Chennai's night this time round.