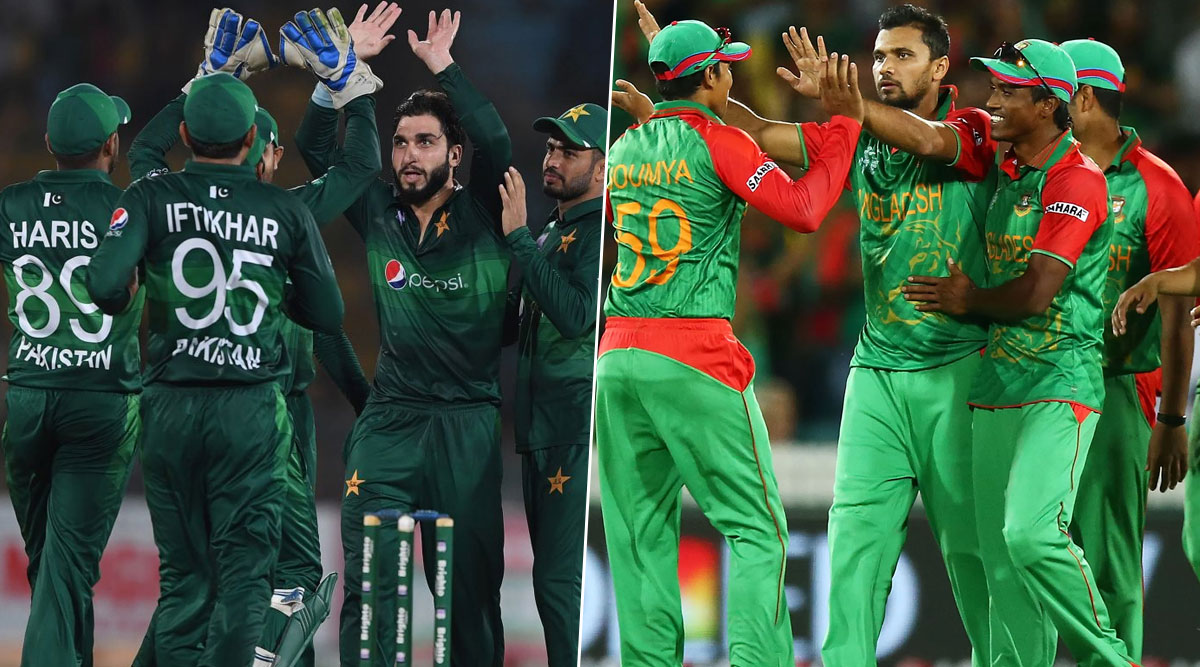 Pakistan will hope to revive their T20I form when they host Bangladesh in a three-match Twenty20 International series, starting January 24, 2020 (Friday). Pakistan, the top-ranked ICC T20I team, has lost 8 times in 9 T20I matches last year but have the chance of reviving their T20I fortunes when they host Bangladesh – against whom they hold a superior T20I record – in the 1st T20I match in Lahore. Pakistan vs Bangladesh 1st T20I match will be played on January 24, 2020. Pakistan lead Bangladesh 8-2 in T20I head-to-head records having beaten them 8 times in 10 meetings, which includes a massive 102-run victory in the only PAK vs BAN T20I match in Pakistan. Meanwhile, take a look at the results of last 5 T20I encounters between Pakistan and Bangladesh. Pakistan vs Bangladesh 2020 Schedule in IST, Free PDF Download Online.

By virtue of winning 17 out of 19 T20I matches in 2018, Pakistan were deservedly the world No 1 team in Twenty20 internationals. But have since lost 8 out of the next 9 T20Is, which includes a humiliating clean-sweep at home against a second-string Sri Lanka side and drawing a blank in Australia. Pakistan vs Bangladesh 1st T20I Dream11 Team Prediction.

Pakistan’s last T20I series win came against New Zealand in 2018 and since then the world’s top-ranked team have conceded defeats in each of their last three T20I series and have gone an entire 2019 calendar year with only 1 win. Bangladesh, on the other, shared the tri-series with Afghanistan and gave a good account of themselves in the 1-2 T20I series defeat to India.

The last time Pakistan faced Bangladesh in a T20I match was over 4 years ago in 2016. This was at the World T20 Super 10 match which Pakistan won comfortably by 55 runs. Mohammad Amir and Shahid Afridi took two wickets each to help Pakistan defend 201 runs. Ahmed Shehzad (52) and Mohammad Hafeez (64) scored half-centuries while captain Afridi hit a quick-fire 19-ball 49 to take Pakistan over the 200-run mark after opting to bat first.

This was at the 2016 Asian Cup where Bangladesh upset Pakistan to record a famous victory. Pakistan managed to score only 129 runs in 20 overs with Sarfaraz Ahmed hitting a steady half-century as Al-Amin Hossain’s three-wicket haul restricted Pakistan. In reply, Bangladesh romped home with 5 deliveries remaining with Mahmudullah (22) and Mashrafe Mortaza (12) taking Bangladesh over the line.

A one-off T20I match between Bangladesh and Pakistan with the former winning by 7 wickets. Pakistan could only score 141 in 20 overs after opting to bat first and Bangladesh won with 22 deliveries remaining. Sabbir Rahman and Shakib Al Hasan scored half-centuries each and shared a 105-run stand for the fourth wicket to seal the victory.

Pakistan maintained their clean slate against Bangladesh in ICC tournaments. Pakistan beat Bangladesh by 50 runs in a group match at the 2014 World T20. Ahmed Shahzad scored a century off 62 deliveries and Shahid Afridi than smashed a 9-ball 22 to take Pakistan to 190 in 20 overs. In reply, Bangladesh could only manage 140/7 with Umar Gul being the chief wicket-taker with a three-wicket haul.

Another World Cup match and another group stage fixture. Pakistan beat Bangladesh by 8 wickets chasing down a 176-run target with 8 deliveries to spare. Shakib Al Hasan’s 84-ball 54 runs helped Bangladesh post 175 but Pakistan chased it down without battling a sweat. Imran Nazir and Mohammad Hafeez shared a 124-run opening stand with the latter hitting 75 off just 36 deliveries to take Pakistan home.

This will be the first time Bangladesh will be playing Pakistan in a bilateral T20I series. Both teams had earlier met mostly in ICC tournaments or played a one-off T2wenty20 international match between them. Pakistan and Bangladesh have also met each other in only 1 T20I match in Pakistan. Pakistan won that match by 102 runs with Misbah-ul-Haq hitting 87 runs from 53 deliveries. Bangladesh were bundled for 101 with Mansoor Amjad taking a three-wicket haul. Misbah-ul-Haq now is the chief selector and head coach of Pakistan.