Both sides possess quality players and some deadly strikers of the ball and this contest promises to be a riveting one. Punjab would be more desperate for a win, having played eight matches so far and having acquired just six points. A win for the Royals by a good margin meanwhile, can put them in the top four in the points table. 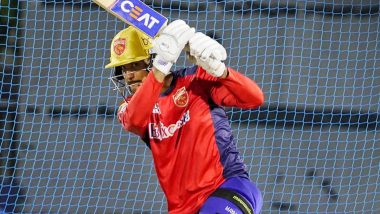 Punjab Kings and Rajasthan Royals would battle it out against each other in the 32nd match of the Indian Premier League 2021 on Tuesday, September 21. The match would be played at the Dubai International Stadium and would be played at 7:30 pm IST (Indian Standard Time). Both Rajasthan Royals and Punjab Kings have had experienced a similar line of outcomes this season. KL Rahul's side have played eight games, losing three and are currently sixth in the points table with six points, Royals too have the same number of points but are placed fifth, having played a game less. The first match that these two sides played in this year's IPL was a high scoring encounter with Samson scoring a stylish, yet quickfire 119 of just 50 balls,  Despite his fighting knock that day, his side ended up being the second-best as Punjab managed to carve out a four-run win in the fourth match in this year's competition. Virat Kohli to Retire As RCB Skipper After IPL 2021 Season

Ever since, Punjab have blown hot and cold and never really were able to build on the momentum after winning a match and hence they are sixth in the table, having played the most number of games (8) alongside Delhi Capitals in the first phase of the competition. Rajasthan, who have made some impact signings in Evin Lewis and Tabraiz Shamsi, would look to be at their absolute best if they want to keep alive their dream of qualifying for the playoffs. It would be an interesting clash nonetheless. Here are the Dream 11 Fantasy tips for this match.

KL Rahul (PBKS) can be picked as the captain of your PBKS vs RR Dream11 Team while Chris Morris (RR) could be selected as the vice-captain.

(The above story first appeared on LatestLY on Sep 20, 2021 11:33 AM IST. For more news and updates on politics, world, sports, entertainment and lifestyle, log on to our website latestly.com).