Pune Devils will aim to register their second straight win as they take on Qalandars in the fourth match of the Abu Dhabi T10 League 2021. The Group B match takes place at the Sheikh Zayed Stadium in Abu Dhabi on Friday (January 29). 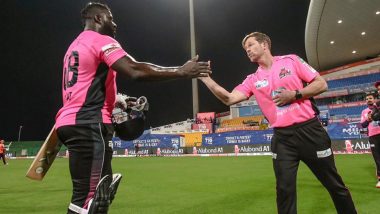 Pune Devils vs Qalandars, Abu Dhabi T10 League 2021, Live Streaming and Live Telecast Details: Pune Devils will aim to register their second straight win as they take on Qalandars in the fourth match of the Abu Dhabi T10 League 2021. The Group B match takes place at the Sheikh Zayed Stadium in Abu Dhabi on Friday (January 29). While Devils defeated Deccan Gladiators by seven wickets in their opening game, Qalandars will play their first match of the tournament and would like to get off to a winning start. Notably, Qalandars finished the last season at the fourth position but will want to put up an even better show this time around. Meanwhile, fans can scroll down to get the live streaming, live telecast and other details of PD vs QAL match. Abu Dhabi T10 League 2021 Schedule, Live Streaming Online, TV Telecast, Teams, Groups and Everything You Need to Know About the T10 Tournament.

Skipper Nasir Hossain shone for Pune in the opening game as he rattled Gladiators’ middle-order with a three-wicket haul. As a result, the Kieron Pollard-led team were restricted to 104-5 while batting first. Chasing the challenging total, opener Kennar Lewis scored a quick-fire fifty to take his side over the line. On the other hand, Qalandars have the services of Tom Banton, Chris Jordan, Sohail Tanvir and Shahid Afridi who are proven stars of this format of the game. As the upcoming game gets lined up, let’s look at the streaming and other details.

Pune Devils vs Qalandars will begin at 5:30 PM IST (Indian Standard Time) on Friday (January 29). PD vs QAL will be played at the Sheikh Zayed Cricket Stadium in Abu Dhabi, United Arab Emirates.

Fans can catch the live action of Pune Devils vs Qalandars match in Abu Dhabi T10 league 2021 on Sony Pictures Networks India channels. Sony Pictures Network (SPN) is the official broadcaster of Abu Dhabi T10 League in India and will be live telecasting the matches. Viewers can tune into Sony Six and Sony Ten 3 channels to catch the PD vs QAL game live on television.

SonyLiv, the official online media streaming outlet of Sony Network, will be live streaming the Pune Devils vs Deccan Gladiators encounter online for its fans in India. Fans can either download the app or log in to sonyliv.com to enjoy PD vs DG live action.

(The above story first appeared on LatestLY on Jan 29, 2021 02:20 PM IST. For more news and updates on politics, world, sports, entertainment and lifestyle, log on to our website latestly.com).