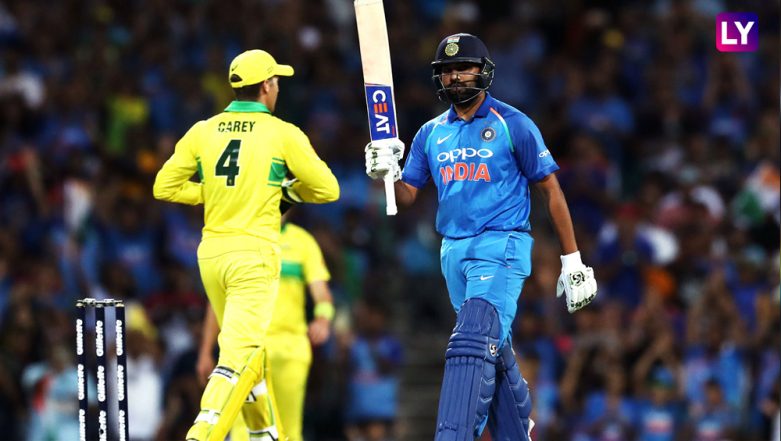 Rohit Sharma scored a hard-fought century in the first ODI match against Australia at the Sydney Cricket Ground on January 12. The Indian opener played a splendid inning and held anchor at one end while wickets continued to tumble at the other end. The 31-year-old batsman scored 133 runs off 129 balls in which he hit ten fours and six sixes.

With his 22nd ODI hundred, Rohit has become the first Indian batsman to score five ODI centuries in Australia. With this hundred, Rohit has now hit four consecutive 5-plus scores against Australia in ODI format. New Dad Rohit Sharma Gifted a Toy for Daughter Samaira By Indian Journalist; Hitman Elated with the Gesture (Watch Video).

It was Marcus Stoinis’ slower ball that undid Rohit Sharma’s brilliant century. Rohit mistimed slower short-ball and tried to clear the deep midwicket boundary, but was caught by Glenn Maxwell, after hitting a four on the previous ball. India still needed 66 runs to win, when Rohit walked back to the pavilion. Rohit Sharma Shares First Picture of Daughter Along With Wife Ritika Sajdeh and It Is Adorable!

India had a rocky start to their run chase after opener Shikhar Dhawan, and skipper Virat Kohli walked back in the hut quite early in the innings. Ambati Rayudu, playing his first ODI in Australia failed to score a run Down Under. However, he built a partnership with MS Dhoni and tried to steady India’s sinking ship. Earlier, Australia had put 288/5 on the scoreboard in their first innings.