Even former cricketer Madan Lal had told IANS on Wednesday that Rohit should lead India in the shorter formats. The 34-year-old opener is one of the most experienced players in the squad and is also the vice-captain of the limited-over sides, making him the prime contender for the job once Kohli relinquishes T20I captaincy at the end of the T20 World Cup. 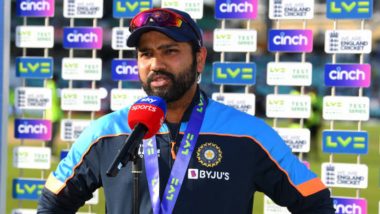 New Delhi, Sep 16 (IANS) Eight years back, Virat Kohli had revealed a secret when asked as to who apart from him and MS Dhoni had the ability to lead the India team. He had said, "Rohit Sharma has a tremendous cricketing brain. He is captain material." The charisma of Rohit has been on the rise ever since, as the Mumbaikar has earned himself a reputation of being a strong leader among his teammates. His exploits as the captain of Mumbai Indians in the Indian Premier League (IPL) bear testimony to that fact. However, he didn't get much of a chance at the national level. So, when on Thursday Kohli announced his decision to step down as the skipper of Team India in the shortest format after the upcoming T20 World Cup, the first question that came to all cricket lovers' mind was: Who would be the next captain? Virat Kohli To Step Down As T20I Skipper: BCCI President Sourav Ganguly Thanks 32-Year Old for ‘Tremendous Performance As Captain', Says, ‘ Decision Made Keeping in Mind the Future Roadmap’

And Rohit leads the chart, without a shred of doubt. This is also supported by the fact that Kohli specifically mentioned Rohit in his announcement note posted on Twitter, stating that he had discussed his decision with coach Ravi Shastri and the Mumbai opener. While India's record under Kohli in T20Is has been good, Kohli the skipper is still searching for his first ICC trophy. And what better opportunity and motivation for him to break the jinx than to win the trophy when the ICC T20 World Cup commences in the UAE and Oman from October 17. Kohli has led India in 45 T20I matches, winning 27 and losing 14 while two matches ended in no results and two were tied. That makes Kohli India's second most successful T20 captain in terms of wins after Dhoni, who leads the tally with 41 wins in 72 matches.

So, did he step down or he lost his job? This is also a question to which the netizens are seeking an answer from the BCCI right now. It was reported earlier that Kohli's failure to win an ICC trophy has become a major roadblock in his captaincy. Also, BCCI officials were reportedly not happy with Kohli's team selection for the World Test Championship final, which India had lost to New Zealand. Later, reports surfaced that Kohli might step down as captain in the shorter format to focus on Test cricket. Interestingly, BCCI Treasurer Arun Dhumal had denied any such reports, saying that the board has never met or discussed anything related to captaincy.

However, after Kohli announced his decision on Thursday, BCCI Secretary Jay Shah said that he has been in discussion with Kohli and the leadership team for the last six months and the decision has been thought through. Sources also said that the BCCI was looking to clip Kohli and chief coach Shastri's wings and that was the reason why Dhoni was named the mentor of Team India for the T20 World Cup.

IANS had reported earlier that Jay Shah had initiated the move to bring in Dhoni as the mentor of the Indian squad. Very few, not even the biggest of the BCCI officials, were in the know of the move. Shastri, who has been the full-time coach since 2017, is unlikely to be given a third term and a new face is likely to join the team as coach post the T20 World Cup.

For a long time, split captaincy has been a hot topic in Indian cricket. Many have suggested that Rohit should be given the charge of leadership, at least of the T20 side, especially considering the workload on Kohli and his 'shortcomings as a leader in ICC tournaments.

Even former cricketer Madan Lal had told IANS on Wednesday that Rohit should lead India in the shorter formats. The 34-year-old opener is one of the most experienced players in the squad and is also the vice-captain of the limited-over sides, making him the prime contender for the job once Kohli relinquishes T20I captaincy at the end of the T20 World Cup.

Rohit also has an envious record in the IPL, having led Mumbai Indians to five IPL titles. Rohit has also captained India in 10 ODIs and 19 T20Is, winning 8 and 15, respectively.

(The above story first appeared on LatestLY on Sep 16, 2021 11:18 PM IST. For more news and updates on politics, world, sports, entertainment and lifestyle, log on to our website latestly.com).