Rishabh Pant led Delhi have struggled for any consistency this season and a top performance is often followed by a flat one. Opponents Rajasthan, they start the contest at the third place and a win this evening could further consolidate their play-off hopes. 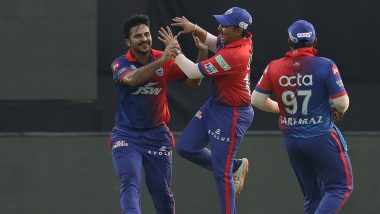 Delhi Capitals will be looking to close the gap at the top four when they take on Rajasthan Royals in a crunch tie in the Indian Premier League at the DY Patil Stadium on May 11 at 07:30 PM IST. Rishabh Pant led Delhi have struggled for any consistency this season and a top performance is often followed by a flat one. They are side that is built around their fabled batting unit and any failure there seems to have a repercussion on the results. The bowlers have struggled to maintain good economy rates which is a cause for concern. For Opponents Rajasthan, they start the contest at the third place and a win this evening could further consolidate their play-off hopes. With three wins in their last five matches, they are in descent form. IPL 2022 Playoffs Scenario: 3 Likely Teams That Will Join Gujarat Titans in the Final Four.

Yashasvi Jaiswal was the star of the show for Rajasthan as they chased down a score of 190 in their previous match. With Jos Butler in form of his life, the top three looks solid for this team and can dominate in the powerplays. Shimron Hetmyer in the lower order can play a host of role and has improved significantly this season. In the bowling department, all eyes will be on Trent Boult with the Kiwi pacer an expert in the providing early breakthroughs. RR vs DC Preview: Likely Playing XIs, Key Battles, Head to Head and Other Things You Need To Know About TATA IPL 2022 Match 58.

Prithvi Shaw, who was hospitalised with high fever, is a doubt for the contest for Delhi Capitals. Srikar Bharat will continue in the starting eleven should the Mumbai batsman be ruled out. Mitchell Marsh and Rishabh Pant in the middle order have their task cut out with Delhi banking heavily on bowling all-rounders in the team.

Those unable to watch the RR vs DC match live on television can follow the game online. Disney+ Hotstar will be live streaming the Rajasthan Royals vs Delhi Capitals match online for its fans in India. Fans, however, need to subscribe to Hotstar by paying a nominal subscription fee. Rajasthan Royals should claim all two points from match as they look the more balanced outfit.

(The above story first appeared on LatestLY on May 11, 2022 01:40 PM IST. For more news and updates on politics, world, sports, entertainment and lifestyle, log on to our website latestly.com).