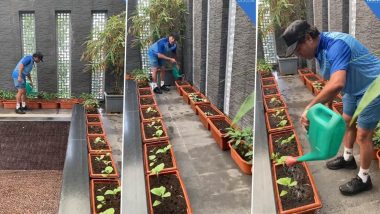 The World Nature Conservation Day is observed on July 28 every year in order to raise awareness about protecting nature and conserving natural resources. On the occasion of World Nature Conservation Day 2020, legendary Indian cricketer Sachin Tendulkar took to his official Twitter page and shared a video in which he can be seen watering the plants in his house. The Master Blaster also showcased his in-depth knowledge about plants as he explains the fans which plant will grow and which will not. Well, conserving and protecting the green bodies is the need of the hour. Hence, the 2011-World Cup winner is certainly spreading an inspiring message. World Nature Conservation Day 2020 Date and History: Know Significance of the Day.

“My kitchen garden. Smiling face with smiling eyes. We can all take small steps towards sustainability. #WorldNatureConservationDay,” wrote the former Mumbai Indians skipper while sharing the video on the micro-blogging website. Fans were in awe seeing Tendulkar’s love for nature as the comment section of the post was filled in a jiffy. Meanwhile, have a look at the video shared the highest-run scorer in international cricket. Sachin Tendulkar Says Playing Against Fielder Like Jonty Rhodes Was Always a Challenge.

Meanwhile, Tendulkar, who bid adieu to the game in November 2013, has been quite active on social media in recent times and is constantly updating his fans with his daily life activities.

The former batsman is also following the ongoing Test series between England and West Indies and is frequently presenting his views on the game. In fact, most of his predictions have been proven right in the series. Ahead of the opening game, he called Jason Holder an ‘under-rated’ all-rounder and the Caribbean skipper took a six-wicket haul. While, he backed Stuart Broad to fire in the final encounter and the pacer has taken nine wickets so far in the match.

(The above story first appeared on LatestLY on Jul 28, 2020 06:14 PM IST. For more news and updates on politics, world, sports, entertainment and lifestyle, log on to our website latestly.com).