Cricket fans were sent in nostalgia as the likes of Sachin Tendulkar and Yuvraj Singh unleashed their A-game against West Indies Legends in the semi-final encounter of Road Safety World Series 2021. While the Master Blaster scored a magnificent half-century, Yuvraj Singh smashed six towering sixes. 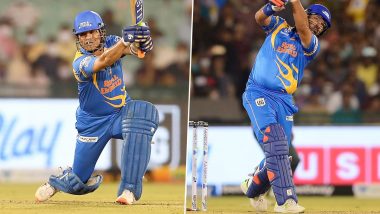 Cricket fans were sent in nostalgia as the likes of Sachin Tendulkar and Yuvraj Singh unleashed their A-game against West Indies Legends in the semi-final encounter of Road Safety World Series 2021. It was truly a batting exhibition at the Shaheed Veer Narayan Singh International Stadium in Raipur as India Legends mustered 218/3 after being put on to bat first. Openers Virender Sehwag and Sachin Tendulkar started the onslaught by attacking the Caribbean bowlers from the outset. While the former perished after a quick-fire 35, the Master Blaster went on to register his second-half-century of the season. Sachin Tendulkar Registers Quick-Fire Half-Century During India Legends vs West Indies Legends Semi-final.

He, in total, scored 65 off 42 balls before falling prey to Tino Best. The baton was then passed onto Yusuf Pathan and Yuvraj Singh and the duo didn’t disappoint. Both the dashers exhibited their obsession for sixes as the ball was flying all over the Raipur Stadium. Yuvraj even smashed Mahendra Nagamootoo for four massive sixes in the penultimate over of the innings. As a result, India piled a mountain and would back them to make a place in the finals. Alongside the fans in the stadium, Twitterati were highly enthralled seeing India’s blitzes. Have a look how they reacted! Yuvraj Singh Almost Smashed Six Sixes in an Over During India Legends vs West Indies Legends.

When you hear chanting sachin..sachin

Although Indian bowlers have a cushion of the massive total, they shouldn’t be complacent against the formidable West Indies batting line-up. Dashers like Dwayne Smith and Narsingh Deonarine scored half-centuries in their last outing while Brian Lara doesn’t need any introduction. Nevertheless, India would be confident with Irfan Pathan, Pragyan Ojha and Munaf Patel in the ranks.

(The above story first appeared on LatestLY on Mar 17, 2021 09:25 PM IST. For more news and updates on politics, world, sports, entertainment and lifestyle, log on to our website latestly.com).