Billings made his international debut in June 2015 and didn't take long in proving his mettle. His hitting ability grabbed a lot of eyeballs and in the subsequent year, he was awarded an IPL contract with Delhi Daredevils (Delhi Capitals). The dasher played with the franchise for two seasons, scoring one fifty in each one. 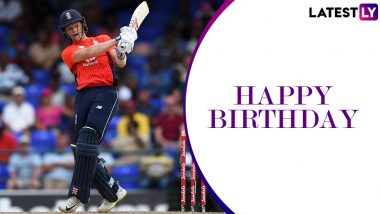 England batsman Sam Billings celebrates his 29th birthday on Monday (June 15, 2020). The right-handed batsman possesses the ability to attack the bowlers from the outset and that too with minimal risk. Owing to England's mighty batting order in limited-overs cricket, Billings might not have played in the national jersey. However, he has been performing consistently in domestic cricket and T20 leagues around the world. From the impeccable cover drive to the cheeky switch hit, Billings has every shot in his book which one needs to excel in white-ball cricket. Below, we'll look at some of his best knocks. Nervous James Anderson Desperate to Play As England Look to Resume Cricket Activities.

Billings made his international debut in June 2015 and didn't take long in proving his mettle. His hitting ability grabbed a lot of eyeballs and in the subsequent year, he was awarded an IPL contract with Delhi Daredevils (Delhi Capitals). The dasher played with the franchise for two seasons, scoring one fifty in each one. His services were bagged by Chennai Super Kings in the next year and played few impressive knocks there too. As the batsman turns a year older, let's look at some of his best performances.

87 Vs West Indies in Basseterre

England were reeling at 4/32 in the 2nd T20I of their 2019 tour of West Indies. However, Billings came to bat at number six and shifted the momentum towards his side's favour. He just didn't bring the innings back on track but also scored runs at a rapid pace. His 47-ball 87 guided his side to 182/6 which proved to be enough as the visitors won the game by 137 runs.

55 Vs Kings XI Punjab in Delhi

Opening the innings of Delhi Daredevils in IPL 2017, Billings put up a batting exhibition against Kings XI Punjab and scored a brilliant half-century. The likes of Sanju Samson, Shreyas Iyer and Rishabh Pant were dismissed early in the innings. However, Billings didn't put his guards down and his knock helped Delhi secure a 51-run triumph.

56 Vs Kolkata Knight Riders in Chennai

Chasing a mammoth total of 203 runs against Kolkata Knight Riders in IPL 2018, Billings, who was making his debut for Chennai Super Kings, came out to bat at number five. The right-handed batsman made his intentions clear from the first ball and paced his knock to perfection. Despite not getting much support from the other end, Billings scored a 23-ball 56 and helped CSK win the game by five wickets.

With the ICC T20 World Cup 2020 likely to be played this year, Billings will aim to make a place in the England squad for the gala tournament. However, the English side boasts off a brilliant batting order and it will be interesting to see if Billings can make it to the squad or not.

(The above story first appeared on LatestLY on Jun 15, 2020 09:00 AM IST. For more news and updates on politics, world, sports, entertainment and lifestyle, log on to our website latestly.com).