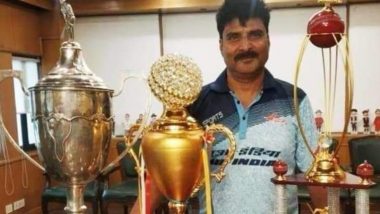 Former Delhi cricketer Sanjay Dobal, passed away on Monday after failing to recover from COVID-19 infection. The former all-rounder and staff member of Delhi U-23 cricket team passed away due to complications arising from the virus infections, sources said. Dobal was 53 and is survived by his wife and two sons Siddhant and Ekansh. Dobal was said to have been suffering from a severe case of pneumonia and had also contracted coronavirus. Many from the cricket fraternity, including Aakash Chopra, mourned his demise. Sanjay Dobal, Former Delhi Cricketer, Dies at 53 Due to Cardiac Arrest.

"Dobal showed symptoms and was first admitted to a medical facility in Bahadurgarh, a week back. He had tested positive for Covid-19. However, his condition deteriorated and was shifted to a Dwarka hospital with better facilities. He was given plasma but treatment didn't work," news agency PTI quoted a DDCA official as saying.

Shocked and saddened. Lost an importat member of our cricket fraternity today. Sanjay Dobhal bhai (53) is no more. There isn’t a cricketer in this country who he didn’t help...and did it with a smile. Always. Went away too soon...may your soul R.I.P. #Covid_19

Sad to hear about the unfortunate demise of #SanjayDobal who succumbed to covid 19. I never played with the former Delhi all-rounder but he was such a gem of a person. Used to meet up regularly at Delhi airport. Very helpful. RIP .Om Shanti pic.twitter.com/IRzVt0obF6

He was a great human being , Always helpful ,full of joy . Sanjay Dobal sir is no more 😔 !! My condolences to his family and friends . You will be missed sir . Rest in peace 🙏🏻 https://t.co/jtiAlYUcFM

My most sincere prayers for Sanjay Dobal sir’s soul🙏🏻 he was a gem and this cruel disease is wrecking havoc!! He was fit and healthy don’t know what to say. Rest in peace thank you for always being there, I’ll miss you a lot!🙏🏻😔 pic.twitter.com/1cVDpFXwec

He also played for the famous Sonnet club and was coached by Tarak Sinha. After his retirement from playing, Dobal coached Air India. Many international cricketers had urged people, who had recovered from COVID-19 to donate their plasma to save their beloved friend.

“He was treated at different hospitals before it was discovered he had been infected by the dreaded virus. We organised plasma (treatment) for him on Sunday evening but he gave up this morning,” former Delhi cricketer Mithun Manhas was quoted as saying by Sportstar. Dobal’s eldest son Siddhant plays first-class cricket for Rajasthan while the younger son is a U23 player for Delhi.

(The above story first appeared on LatestLY on Jun 29, 2020 02:39 PM IST. For more news and updates on politics, world, sports, entertainment and lifestyle, log on to our website latestly.com).