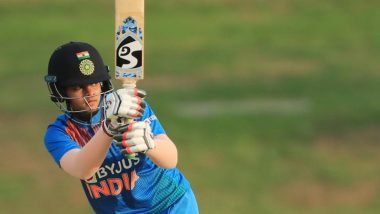 Riding on a quick-fire knock by teenage sensation Shafali Verma and a well-compiled fifty by Smriti Mandhana, India have defeated Australia by seven wickets in the 5th match of the ongoing Women's T20I Tri-Series. With this win, the Harmanpreet Kaur and Co have also kept their hopes alive to securing a berth in the finals of the tournament. Chasing a mammoth-looking target of 174 runs, the Indian side got off to the best possible start as the opener Shafali Verma unleased her carnage and attacked the Aussie bowlers from the outset and made a 29-ball 48. Later, Mandhana and skipper Harmanpreet Kaur carried the momentum forward and carried their side over the line. India Lose to England by Four Wickets in Women’s T20I Tri-Series 2020.

Earlier in the match, India won the toss and invited the Australian eve side to bat at the Junction Oval in Melbourne. The decision looked spot-on as the dangerous opener Alyssa Healy was dismissed for a duck. However, Ashleigh Gardner came to bat at number three and played a scintillating knock. The batswoman rained fours and sixes and scored 93 runs. Courtsey her effort, the home side piled up 173/5 in the first innings. Unfortunately, her knock went in vain.

Well, India might have won this encounter but they still have to depend upon the last group match between India and England to make a spot in the finals. Only if England manages to beat Australia in the sixth match then India can go to the final clash. Nevertheless, England are all but through to the finals due to a very high net-run rate and Australia will certainly leave no stones unturned to win the final group match to see themselves in the final.

(The above story first appeared on LatestLY on Feb 08, 2020 09:51 AM IST. For more news and updates on politics, world, sports, entertainment and lifestyle, log on to our website latestly.com).