Shreyas Iyer Issues Clarification Over His Comment on Sourav Ganguly, Delhi Capitals Captain Says That He Only Wanted to Express His Gratitude 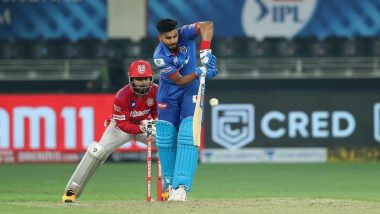 The fans were quick enough to pick these words by Iyer after the toss where DC skipper said, "We would have bowled first as well. I have learned to take some responsibility, with the likes of Ponting and Ganguly, it makes my task a bit easier." Post this, they brought up the infamous conflict of interest. So Sourav Ganguly was hired as the mentor of Delhi Capitals in last season. But after he held the post of the BCCI President as per the rules, he is not supposed to offer his advisory services to any of the teams.

Now, the comment soon sparked controversy but the damage was done already. Thus Iyer took to social media and emphasised that he only wanted to express his gratitude to Ganguly. Check out the post below:

As a young captain, I am thankful to Ricky and Dada for being a part of my journey as a cricketer and captain last season.

My comment yesterday was to emphasise my gratitude towards the role they both have played in my personal growth as a captain.

Talking about Delhi Capitals the team won their first game of the IPL 2020 by one run against KXIP after the match ran into a super over. The team will play their next game against the Chennai Super Kings on September 25, 2020, at the Dubai International Stadium.

(The above story first appeared on LatestLY on Sep 22, 2020 12:10 PM IST. For more news and updates on politics, world, sports, entertainment and lifestyle, log on to our website latestly.com).