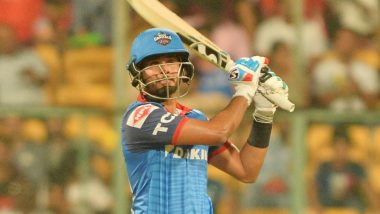 Shreyas Iyer’s Delhi Capitals had a quite a magical season in IPL 2019 as they ended up on number three of the table. The team would want to replicate their performance and would obviously be aiming to clinch the IPL 2020 trophy.  Delhi Capitals in the last season had won nine matches out of 14 which was quite a good performance by the team. The Delhi Capitals skipper is leaving no stone unturned to keep in touch with the game as he played a smashing shot while she was playing indoors. The dates for the IPL 2020 have been announced and the much-awaited event will begin from September 19, 2020, in UAE. DC Squad for IPL 2020 in UAE: Check Updated Players' List of Delhi Capitals Team Led by Shreyas Iyer for Indian Premier League Season 13.

The teams are expected to leave for UAE by August 20, 2020. The Delhi Capitals skipper was seen practising his shots indoor and even recorded the video of the same. The IPL franchise shared the video of their captain on social media. They captioned the clip with the words, "Literally a 𝙨𝙢𝙖𝙨𝙝𝙞𝙣𝙜 𝙨𝙝𝙤𝙩 from #SkipperShreyas."Check out the video shared by DC below:

The IPL 2020 was supposed to be held in March this year. But it was due to the outspread of the coronavirus that the tournament got postponed and the entire country was confined to the four walls of their houses. Thus the sporting schedules were affected drastically and now when the IPL 2020 has been announced the cricket starving fans have gone berserk and are keenly waiting for the tournament to begin soon.

(The above story first appeared on LatestLY on Aug 09, 2020 01:16 PM IST. For more news and updates on politics, world, sports, entertainment and lifestyle, log on to our website latestly.com).