Mahendra Singh Dhoni's World Cup winning six resides in India's collective consciousness and it was a shot that changed a lot of lives, including that of little-known Solapur athlete Kiran Navgire. 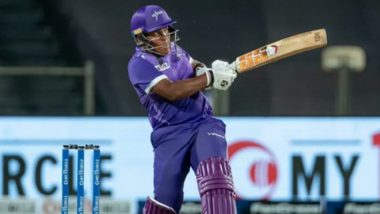 Pune, May 27: Mahendra Singh Dhoni's World Cup winning six resides in India's collective consciousness and it was a shot that changed a lot of lives, including that of little-known Solapur athlete Kiran Navgire. And so, athletics' loss became cricket's gain as the former Maharashtra state level athlete decided that there is no fun if she can't tonk the ball like her "idol". Eleven years later, at 28, Navgire, who plays domestic cricket for Nagaland, has found instant stardom, with some of the most powerful blows that one has ever seen from an Indian batter. Women's T20 Challenge 2022: Velocity Qualify for Final Despite 16-Run Loss Against Trailblazers.

In her very second big stage game in the Women's T20 Challenger, the right-handed Navgire hit the fastest fifty for her team Velocity and her 34-ball-69 will certainly be remembered for a long time, especially the five sixes.

"I really feel good when I hit sixes and whenever I practise in the nets. I practice hitting sixes, I follow Dhoni sir and I love finishing like him, hitting big sixes," Navgire told her teammate Yastika Bhatia during an interaction for bcci.tv. My11Circle Women’s T20 Challenge 2022 Schedule: Get Squads, Teams, Fixtures and Time Table With Match Timings in IST of 'Women’s IPL'.

For her, Dhoni's unbeaten 91 against Sri Lanka made her set new goals as she concentrated more on athletics, kho-kho, kabaddi during her formative years while helping out her father in family farm in Solapur district's Mire village."I watched the 2011 World Cup final and Dhoni sir's winning sixer is something that impressed me and remained imprinted in my head. That six inspired me and I always feel that in every match, I can hit a six like that,' said the stockily built Navgire, who was a state level shot-putter.

On Thursday, Velocity skipper Deepti Sharma sent her up the order at No. 3 and Navgire didn't disappoint anyone, taking international bowlers like Poonam Yadav, Salma Khatun and Rajeshwari Gayakwad to the cleaners. "I dont like playing dot balls and want to score something off every ball and hence I got a good score," her answers were as uncomplicated as her lofted hits.

"In domestic cricket, I hadn't batted up the order but I had a good season there and had some good scores. My game revolves around my power hitting ability and if it's in my arc, I send it out of the park and if there are good balls, I like to rotate strikes playing singles and doubles," Navgire said.

She admitted that she was a bit nervous at the start but coach Devika Palshikar's sound advice did help a lot. "Initially, I was a bit nervous bit then everything settled down. The captain (Deepti) and teammates gave me lot of confidence. Coach Devika ma'am said 'you don't need to look at the bowler but at the ball and I did just that," she added.