Kolkata Knight Riders (KKR) wicket-keeper Dinesh Karthik has said people don't realise the gravity of what they post when they are on social media. 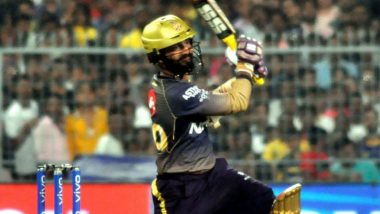 Sharjah [UAE], October 12: Kolkata Knight Riders (KKR) wicket-keeper Dinesh Karthik has said people don't realise the gravity of what they post when they are on social media.

In a video posted by KKR on Twitter on Tuesday, regarding the 'hate-mongering' players receive on social media, Karthik was seen expressing his disappointment regarding the same.

"I feel sometimes that social media needs to be a kinder place. I think people don't realise the gravity of what they say, be it memes, videos or just the use of words. It's a spur of moment thing for them, instinctively what they feel they just put out there," said the wicket-keeper batter.

Karthik also said these people don't realise that what the other person has to go through because of their actions.

KKR came in support of RCB players and tweeted, "Say NO to hate-mongering. Cricketers are subjected to online abuse way too often. It's high time we take a strong stand against it. Victories and Losses are a part of any sport. We stand by you @RCBTweets@danchristian54 @Gmaxi_3. We've been there too."