The Knight Riders were handed a second defeat in consecutive games. Sunrisers Hyderabad meanwhile, rallied to their third consecutive victory this season, after losing their two opening games. 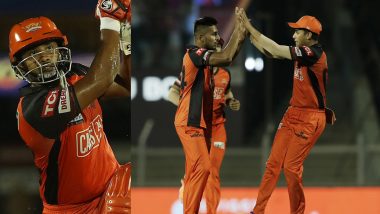 Sunrisers Hyderabad scripted a clinical seven-wicket victory over Kolkata Knight Riders in IPL 2022 on Friday, April 15. Chasing 176 to win, Rahul Tripathi and Aiden Markram put on a show against the Knight Riders as they finished the chase with 13 balls to spare, This was Sunrisers Hyderabad's third consecutive victory and for KKR, it was a second defeat on the trot. Tripathi in particular, was the game-changer for his side with a stylish 35-ball 71 that completely shifted the momentum of this match in favour of Sunrisers Hyderabad. This was their first win over KKR in three years. Dale Steyn’s Ecstatic Celebration in Dugout Goes Viral After Umran Malik Dismisses Shreyas Iyer During SRH vs KKR IPL 2022 Clash (Watch Video)

Sunrisers Hyderabad did lose Abhishek Sharma and Kane Williamson early in the chase but Tripathi and Markram (68*) put together a 94-run stand that bailed SRH out of trouble and formed the foundation for their impressive victory. Tripathi teed off, especially taking a liking to his former teammate Varun Chakaravarthy, who he hit for 18 runs in his first over. After two defeats, Sunrisers Hyderabad have come back on track in roaring fashion.

Earlier, Kolkata Knight Riders were put to bat by Kane Williamson and the decision worked in favour of the 2016 champions. Sunrisers Hyderabad's pacers--Umran Malik (2/24), T Natarajan (3/37), Bhuvneshwar Kumar (1/37) and Marco Jansen (1/26) were very impressive. The highlight of their bowling performance was Malik shattering KKR skipper Shreyas Iyer's stumps with his sheer pace--something that led Dale Steyn to celebrate ecstatically in the dugout. But Nitish Rana's 54 off 36 alongside Andre Russell's powerful 49* off 25 deliveries helped KKR to a competitive total--175/8.

#He also completed 1500 runs in the IPL, most by an uncapped player in the tournament.

Kolkata Knight Riders will aim to bounce back hard and strong when they face Rajasthan Royals on Monday, April 18. Sunrisers Hyderabad on the other hand, will eye to maintain their momentum from this win against Punjab Kings on April 17.

(The above story first appeared on LatestLY on Apr 15, 2022 11:45 PM IST. For more news and updates on politics, world, sports, entertainment and lifestyle, log on to our website latestly.com).