A winning streak from here on, could propel Sanju Samson's side to the playoffs and it would need a massive effort from them if they intend to make it through. On the other hand, Sunrisers Hyderabad, who are out of the playoff race, would now aim to play for pride and consolation. 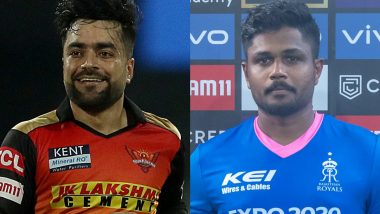 Sunrisers Hyderabad (SRH) and Rajasthan Royals (RR) take on each other in match 40 of the Indian Premier League this year, on Monday, September 27. Both sides have not performed to the potential they were expected to reach and hence find themselves in struggling positions right now. For Hyderabad, this season is as good as done as they technically, would not make it to the playoffs. Former skipper David Warner's poor show with the willow and the middle-order not being in form, has been, amongst others, the reasons for their downfall this season. SRH vs RR Preview: Likely Playing XIs, Key Battles, Head to Head and Other Things You Need To Know About VIVO IPL 2021 Match 40

Rajasthan Royals, who are sixth in the points table, meanwhile still have a chance to make it to the playoffs if they can somehow manage to start a winning streak from here on. That looks improbable though as their batting order has not been in good form but the inaugural champions cannot be ruled out at all. Meanwhile, let us take a look at the picks for the captain and vice-captain's slot for your Dream11 Fantasy Team.

The Afghanistan leg-spinner has been one of the best performers for Sunrisers Hyderabad in their dismal run so far. He has the knack of not just picking wickets but also bowling tidy spells which thwarts the flow of runs, especially if he is given the ball during the middle-overs. Also, he has the ability to contribute handy runs lower down the order. Hence he is a good choice for the captain's slot for this match. SRH vs RR Dream11 Team Prediction IPL 2021: Tips To Pick Best Fantasy Playing XI for Sunrisers Hyderabad vs Rajasthan Royals Indian Premier League Season 14 Match 40

The Rajasthan Royals captain has been their best batsman in the competition so far and despite him not being able to steer his side to a win in their last match against Delhi Capitals, Sanju Samson would once again be relied on to play an important role with the willow in hand.

(The above story first appeared on LatestLY on Sep 27, 2021 11:19 AM IST. For more news and updates on politics, world, sports, entertainment and lifestyle, log on to our website latestly.com).