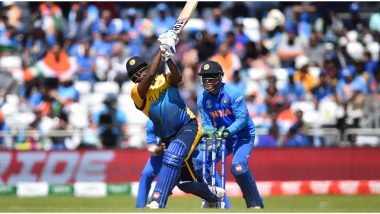 Sri Lanka could become the first country to resume international cricket if its plans on hosting India and Bangladesh go ahead as planned. India were to tour Sri Lanka for a three ODI and T20I series in June which was to be followed by a three-match Test series in Bangladesh but all series were postponed due to the coronavirus pandemic. The Test series against Bangladesh was part of the ICC World Test Championship and would have carried points. But the Sri Lanka cricket board plans to resume cricket action once again in the Island nation now that the lockdown measures and curfew are being relaxed in the country. IPL 2020 in Sri Lanka? SLC to Write to BCCI, Shammi Silva Says Ready to Provide All Facilities.

According to a report from ESPNcricinfo, the SLC has made broad plans of hosting India and Bangladesh in July with the number of covid-19 cases not rising above 500 in the last two weeks. The board is, however, yet to hear from either of the other two cricket boards. “We have made inquiries from both the India and Bangladesh boards and are awaiting a response from them. As of now, those series haven’t been postponed,” SLC CEO Ashley de Silva was quoted as saying by ESPNcricinfo. Sri Lanka vs England 2020 Test Series Rescheduled to January Next Year, Claims SLC CEO Ashley De Silva.

Things certainly will not be as regular as they have been in the past and changes and challenges will not only be left to the country’s cricket board but also to Sri Lankan government, which will have to lift the travel restrictions in the country and also provide a bio-secure environment for the series to go ahead. Moreover, both Bangladesh and India cricket boards will have to seek permission from their respective governments to travel to a foreign country. The Sri Lankan government will also have to make space for quarantining the visiting players once they land, which will also involve several tests before the series can go ahead.

Nizamuddin Chowdhury, the CEO of the Bangladesh cricket board, also spoke on the matter and said: "We have to look at travelling restrictions in Bangladesh, and the quarantine protocols in both countries. We are in discussion [with the SLC], so all the factors will come into play.”

Earlier BCCI treasurer Arun Dhamal ad mentioned that Indian team will only travel when the government allows them to do so. “It all depends on government directives pertaining to lockdown relaxations and travel restrictions. We are open to travel if it doesn’t compromise safety and health of our boys,” Dhumal had said.

Like India and most other nations, Sri Lanka have also been compelled to postpone two home tours due to the spread of the virus. They were supposed to host England in two-match Test series, which could be held next January and will be part of the World Test Championship, followed by limited-overs series against South Africa.

(The above story first appeared on LatestLY on May 18, 2020 08:26 PM IST. For more news and updates on politics, world, sports, entertainment and lifestyle, log on to our website latestly.com).