During the 2018 FIFA World Cup, the Japanese fans made it a point to clean the stadium after the match got over. Ditto with the followers of Senegal. 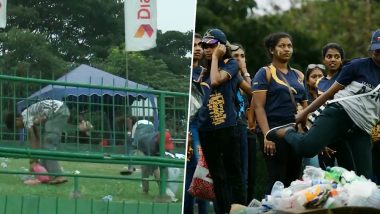 During the 2018 FIFA World Cup, the Japanese fans made it a point to clean the stadium after the match got over. Ditto with the followers of Senegal. The Japanese players also cleaned the dressing room and left a, “Thank You,” note before leaving the Russian country. The players and the fans were applauded for the gesture and the video of the same had gone viral. Now, Sri Lankan fans have learnt a lesson from Senegal and Japan and cleaned the Pallekele International Cricket Stadium after their home team lost the third ODI against South Africa.

The fans stayed back and picked up all the litter from the stadium. The gesture won the heart of the Sri Lankan cricket board and the body appreciated the act. They shared the video of the act on social media. Check out the video below.

The third ODI witnessed a great inning from Reeza Hendricks who scored a century on his debut and thus winning the match for South Africa by 78 runs.  After winning the match, South African captain Faf du Plessis said,"Brilliant today. Once again, the batting was fantastic. We played aggressive. And obviously, for a debutant to play that freely was great to see. Every game there's one or two guys putting their hands up. Today was less spin and a good one-day wicket. Was nice to see even our bowlers getting a bit of pressure but coming out on top. We just keep taking wickets and that's a great way to plug the run flow. The plan is to test the bench strength now that the series is over. It was good to see Reeza do well in a crunch game. Let's see how I pull up tomorrow and then decide whether I'll play the fourth game."

(The above story first appeared on LatestLY on Aug 08, 2018 04:12 PM IST. For more news and updates on politics, world, sports, entertainment and lifestyle, log on to our website latestly.com).