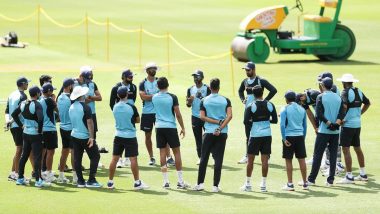 Ahead of the first Test match between India and England, the Indian team is all set to play a warm-up game against County Championship XI. After a three-week-long vacation, the members of the India team have started preparing for the match. The members of the Indian team including Virat Kohli, Cheteshwar Pujara, Ajinkya Rahane and others were seen sweating it out in the nets as a part of the preparation for a practice game. The team was also seen celebrating R Sridhar's birthday.  Rishabh Pant was not seen in the nets as he has been tested positive for COVID-19. Sourav Ganguly Defends Rishabh Pant for Not Wearing a Mask During Euro 2020, Says ‘Rules Have Changed’.

The members of the India team were last seen in action during the World Test Championship 2021 finals where they played against New Zealand. Virat Kohli and men lost the match and post this, they were on a three-week-long break. The players of the Indian team were seen letting their hair down as they visited Wimbledon 2021 and the Euro 2020. Now, let's have a look at the video shared by the BCCI.

Talking about Rishabh Pant, he had been tested positive for COVID-19 a couple of days ago. The BCCI had confirmed the news of the same on social media. He has been isolated now and will obviously not be a part of the squad which is travelling to Durham.

(The above story first appeared on LatestLY on Jul 17, 2021 01:35 PM IST. For more news and updates on politics, world, sports, entertainment and lifestyle, log on to our website latestly.com).