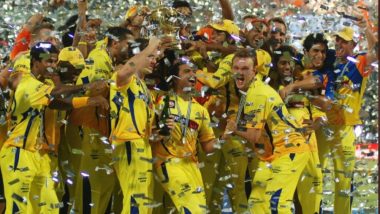 Chennai Super Kings has always impressed us with their impeccable record and has always put their best foot forward. So far in the Indian Premier League, they have won three titles and one of them was in 2011 after the World Cup 2011. In this section of This Day That year, we relive the IPL 2011 final match between CSK and RCB when MS Dhoni and team picked their second trophy with a stunning win against the Royal Challengers Bangalore. Played at the backyard of the Chennai Super Kings, the Yellow Army made a total of 205 runs for the hosts after winning the toss and electing to bat first. Mike Hussey and Murali Vijay made 63 and 95 runs respectively. The Day, That Year: Chennai Super Kings Hails MS Dhoni for his 84 Run Knock During RCB vs CSK, IPL 2019 (Watch Video).

MS Dhoni chipped with 22 runs from 13 balls and titbits from others helped the team reach a total of 205 runs for the loss of five wickets. In reply, Mayank Agarwal and Chris Gayle left early. Virat Kohli and Saurabh Tiwary were the only ones who kept the hopes alive for the title as they scored 35 and 42 runs respectively. With this CSK won the game by 58 runs. Even after nine years, fans can’t contain their excitement as they relive the winning moments. Check out the tweets below:

ever IPL final against RCB. ❤️

He will roar again

My best captain..... no one can replace you ever🌟😍❤💖 #DhoniNeverTires pic.twitter.com/ko85WFrbFt

Talking about the IPL 2020, the tournament has been postponed for an indefinite period of time due to the menace of the coronavirus. This season of the IPL 2020 is likely to be scheduled In October or November with no T20 World Cup happening this year.

(The above story first appeared on LatestLY on May 28, 2020 11:37 AM IST. For more news and updates on politics, world, sports, entertainment and lifestyle, log on to our website latestly.com).