This Day That Year: Deepak Chahar Registers Best Figures in T20Is With Six-Fer Against Bangladesh

Deepak Chahar spitted venom against Bangladesh on this day (November 10) last year and registered the best figures in T20 Internationals. On the Nagpur track where Indian batsmen rained boundaries and sixes, the visitors weren’t able to put the bat on ball owing to Chahar’s brilliance. 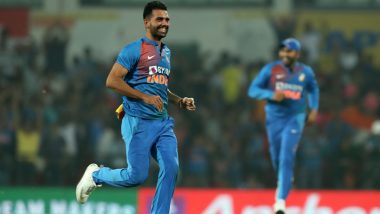 Deepak Chahar spitted venom against Bangladesh on this day (November 10) last year and registered the best figures in T20 Internationals. On the Nagpur track where Indian batsmen rained boundaries and sixes, the visitors weren’t able to put the bat on ball owing to Chahar’s brilliance. He first tormented Bangladesh’s batting order by taking some crucial wickets upfront, but his best was unleashed in the death overs where he didn’t let the Bangla Tigers’ batting line-up by storm. By the end of the game, Chahar’s figured read 6/7 which also includes a hat-trick. As Chahar’s splendid spell completes a year, the Board of Control for Cricket in India (BCCI) and International Cricket Council (ICC) revisited the Indian pacer’s storm. Deepak Chahar Picks Second 'Hat-Trick' in Three Days.

Earlier in the match, Bangladesh skipper Mahmudullah opted to bowl first in Nagpur after winning the toss. Notably, the game – which was the third and last T20I of the series – was a decider with the series perfectly poised at 1-1. India didn’t make a great start with openers Shikhar Dhawan and Rohit Sharma back in the hut cheaply. However, KL Rahul joined forces with Shreyas Iyer, and the duo pulled things back for the home team with their brilliant knocks. Both batsmen scored their respective half-centuries as India posted a competitive total of 174/5. Chennai Super Kings Has a Witty Reply for Deepak Chahar’s Hat-Trick.

Bangladesh’s chase got off to a terrible start as Chahar was making the ball new ball talk under the night sky. He dismissed Liton Das and Soumya Sarkar in the third over to put his side on command. The visitors, however, then steadied the ship with youngsters Mohammad Mithun and Mohammad Naim added 98 runs for the third wicket, threatening to take the game away from the Men in Blue.

🔥 Became only the second Indian to take a T20I hat-trick

Who was the first 🇮🇳 player to achieve the feat? 🤔 pic.twitter.com/loCxeeH1eG

Nevertheless, Chahar came to India’s rescue once again broke the partnership by dismissing Mithun. That wicket proved to be the turning point of the game as none of the other batsmen were able to make an impact. Shivam Dube and Yuzvendra Chahal also added wickets to their tally but the night belonged to Chahar who showcased his brilliance in the death overs as well. He dismissed Shafiul Islam, Mustafizur Rahman and Aminul Islam in three successive deliveries, becoming the first Indian Man pacer to take a T20I hat-trick. As a result, Bangladesh were bundled out for 144 and eventually lost the game by 30 runs.

(The above story first appeared on LatestLY on Nov 10, 2020 10:17 AM IST. For more news and updates on politics, world, sports, entertainment and lifestyle, log on to our website latestly.com).