This Day That Year: Sachin Tendulkar Scored His Maiden ODI Century Against Australia in Colombo 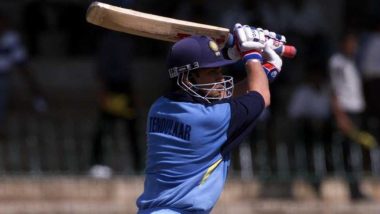 Back in 1994, September 9, Sachin Tendulkar scored his maiden One-Day International (ODI) century. It apparently was his first step towards the record 49 centuries in ODIs. Tendulkar during a triangular series match against Australia at R.Premadasa Stadium in Colombo scored 110 to register his first of the 49 centuries. Believe it or not, it took Tendulkar over four years and 79 matches after making his debut to score his first ODI hundred. Missing Sachin Tendulkar and Vinod Kambli Found! Master Blaster Replies to WV Raman With Their Pic From Indian National Team's Traditional Wear Photoshoot in 1993.

Put to bat first, India posted 246 for eight in their allotted 50 overs. Tendulkar opening the innings went on to register the three-figure mark. He and Manoj Prabhakar added 87 runs for the first wicket with Tendulkar doing the bulk of the scoring. Tendulkar’s innings finally came to an end after was bowled off Craig McDermott.

The First ODI Hundred#OnThisDay in 1994, @sachin_rt scored his maiden ODI Hundred in his 79th game: 110 against Australia at Colombo.

Tendulkar went on to score 48 more ODI hundreds - which is still a Record. pic.twitter.com/JzBu2YSlTC

The legendary batsman faced 130 balls during his knock and slammed eight fours and two sixes. After Tendulkar’s 110, Vinod Kambli was India’s top-scorer with 43 runs. In response, Australia were bundled out for just 215 runs.

(The above story first appeared on LatestLY on Sep 09, 2020 12:44 PM IST. For more news and updates on politics, world, sports, entertainment and lifestyle, log on to our website latestly.com).