While there are numerous reasons behind Australia's dismal performance against India, Tim Paine's failure as captain is indeed the biggest one. The 36-year-old wicket-keeper was defensive in his approach while his rotation of bowlers wasn't brilliant as well. Moreover, he dropped some crucial catches throughout the series, which gave India crucial lifelines. 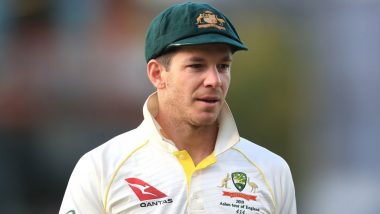 Australian captain Tim Paine has been receiving massive criticism after Team India registered a historic three-wicket victory in Brisbane to win the series 2-1. With this, India also became the first Asian team to script successive Test series triumph down under. This was Australia's arguably most humiliating Test defeat at home as they had a full-strength line-up whereas the visitors fielded a second-string team in the deciding clash at the Gabba. Moreover, Australia had not faced a Test defeat in Brisbane since 1988. Despite having the odds in favour, the Aussies were thrashed by Ajinkya Rahane's troop. Ravi Ashwin Takes to Twitter to 'Give it Back' to Tim Paine.

While there are numerous reasons behind Australia's dismal performance, Tim Paine's failure as captain is indeed the biggest one. The 36-year-old wicket-keeper was defensive in his approach while his rotation of bowlers wasn't brilliant as well. Moreover, he dropped some crucial catches throughout the series, which gave India crucial lifelines. Although he scored a match-winning half-century in the first game, his batting show was just average in the rest of the matches. So, it wouldn't be wrong to say that Paine was the biggest reason behind Australia's downfall. Indian Cricket Fans Troll UK Man Named Tim Payne Mistaking Him For Australian Captain Tim Paine.

For the unversed, Paine became Australia's Test captain in March 2018 after the then Aussie skipper Steve Smith faced a one-year-ban and two-year captaincy ban for his involvement in a ball-tampering scandal during a Test match in Centurion. Although Smith became eligible to lead the team in March 2020, Cricket Australia persisted with Paine. However, it's high to give the reins to anyone else as the Aussies suffered their greatest upset. Here's are three reasons why Paine should be removed as Australia's Test captain.

1. Record As Player - Gregg Chappell, Allan Border, Steve Waugh, Ricky Ponting, Michael Clarke and Steve Smith are some names who led Australia before Tim Paine got the reins. While all these talismans are regarded as one of the greats of the gentleman's game, Paine's record is just mediocre. Although he has affected 157 dismissals behind the stumps in 35 Tests, his batting average of 32.63 isn't impressive. Moreover, the right-handed batsman hasn't managed to smash a single Test century so far. Quite clearly, Paine has failed to carry forward the legacy of former Australian captains.

2. Unimpressive Captaincy – As mentioned above, Paine was quite defensive in the Gabba Test which allowed India to take control of the match. With no close-in fielders, Rishabh Pant and others were comfortable to defend the challenging balls. Moreover, Paine has been horrible with his DRS (Decision Review System) calls. A wicket-keeper is at the best position to understand if the umpire's decision can be challenged or not. However, that isn't the case with the Aussie gloveman. While he didn't opt review required, he went upstairs when the umpire was impeccable. Hence, this is another reason why the veteran needs to be sacked.

3. Age Factor – Paine, ageing 36, is indeed in the fag end of his career and retirement doesn't seem far away from him. Hence, the Australian selectors should start looking for a replacement. As far as the wicket-keeper's slot is concerned, Matthew Wade, a regular part of Australia's Test XI, must be more than happy to take the gloves. Also, Alex Carey, Australia's first-choice keeper in white-ball cricket, can be inducted in the side as well.

Speaking of Paine's potential successor, Steve Smith can get the reins back as he is one of the best Test batsmen going around. At the same time, Pat Cummins, the top-ranked Test bowler, can also be considered for the leadership role.

(The above story first appeared on LatestLY on Jan 20, 2021 12:31 PM IST. For more news and updates on politics, world, sports, entertainment and lifestyle, log on to our website latestly.com).