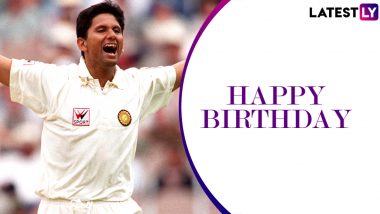 Former Indian pacer Venkatesh Prasad celebrates his 51st birthday on Wednesday (August 5, 2020). The lanky fast bowler could move the ball both ways and the variations in his arsenal made him even more lethal. In fact, Prasad was one of the first few bowlers to use the leg-cutters and off-cutters in the death overs. The Karnataka-born pacer wasn’t one of the fastest bowlers at that time. However, his tall height helped him generate bounce of the deck. Prasad’s impact was second to none in swing-friendly track while he also did well when the track didn’t have much to offer. Below, we’ll revisit some of his best performances. Venkatesh Prasad Against the Use of Saliva to Shine the Ball.

Making his debut in 1994, Prasad didn’t take long in cementing his place in the side. He also played a key role in guiding India to the semi-finals in the 1996 World Cup. Well, who can forget that iconic moment when he rattled Aamir Shoail’s stumps after the Pakistan batsmen tried to sledge him? Speaking of his numbers, Prasad scalped 96 and 196 wickets from 33 Test matches and 161 ODIs. These stats could have been even more staggering if injuries didn’t restrict him. Nevertheless, as the former Indian bowling sensation turns a year older, let’s look back at some of his best performances. Virat Kohli, Sunil Chhetri Recall Battle Between Venkatesh Prasad and Aamir Sohail During India vs Pakistan Clash in 1996 World Cup.

Prasad was up and running in just the second Test of his career against England in 1996. At the iconic Lord’s cricket ground, the right-arm pacer bowled a stellar spell and impressed one and all. He breathed fire in the first innings of the match and claimed his maiden five-wicket haul in the longest format of the game. The pacer went on to take two more wickets in the third innings as the match ended in a draw.

6/33 Vs Pakistan in Chennai

Spotlights were on Saqlain Mushtaq and Anil Kumble in the first match of 1999 Test series as the Chennai pitch was assisting the spinners. However, Prasad bowled his heart out in the third innings of the game and registered his best figures in Test cricket. The likes of Saeed Anwar and Shahid Afridi looked completely clueless against the pacer as he took six wickets. His efforts, however, went in vain as Pakistan won the match by 12 runs.

The Bangalore-born pacer didn’t bowl just one but two stupendous spells in the first Test of India’s 1996-97 tour of India. Prasad made the Proteas batsmen dance to his tunes in the first innings and rattled their top order. He continued his brilliance in the third innings of the game and completed 10 wickets in the match. Indian batsmen, however, failed to deliver as South Africa won the game by 328 runs.

5/27 Vs Pakistan in Manchester

India could only post 227/6 while batting first against Pakistan in the 1999 World Cup. Their loss looked set on the cards. However, Prasad had different ideas. He pierced the defences of Inzamam-ul-Haq and Saeed Anwar to claim his first five-wicket haul in ODIs. Thanks to his efforts, the Men In Green got bundled out for just 180 and India registered their third consecutive victory over Pakistan in World Cups.

4/27 Vs South Africa in Mumbai

Another Venkatesh Prasad special came in the only ODI match of South Africa’s 1996 tour of India. Defending 267 runs, Prasad took two early wickets and got his side off to a sensational start. He took two more wickets with the new ball and put the visitors on the back foot. Riding of his superb spell, India won the match by 74 runs.

Prasad bid adieu to the game in 2006 and his coaching career went underway. He was the coach of India’s U-19 squad which went on to become the runners up in 2006 Under-19 World Cup. Later, he was appointed as the bowling coach of the national team and under his tenure, India won Test series in England and New Zealand. In fact, he was credited for the rise of India’s then bowling mainstay Zaheer Khan.

(The above story first appeared on LatestLY on Aug 05, 2020 08:12 AM IST. For more news and updates on politics, world, sports, entertainment and lifestyle, log on to our website latestly.com).