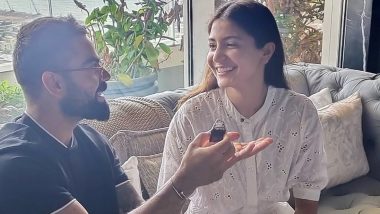 Indian skipper Virat Kohli opened up about many things during his conversation with Mayank Agarwal on the latter’s chat show ‘Open Nets.’ From picking power snatch as a favourite exercise to calling 2014 England tour a milestone, the top-ranked ODI batsman made several interesting revealations. On being asked about his ‘standout quarantine story,’ Kohli revealed that he baked a cake for the first time on the occasion of wife Anushka Sharma’s 32nd birthday. "I baked a cake for the first time in my life on Anushka's birthday. So, will be a standout quarantine story for me because I hadn't baked a cake before in my life," Kohli said to Agarwal. Virat Kohli Recalls Failure in 2014 England Tour, Calls It ‘Milestone’ in His Career.

The Indian skipper also said that the ‘Zero’ actress was impressed by her husband’s baking skills as she ‘loved the cake.’ "And I baked a good cake in my first attempt. So I will always remember that and she told me she loved the cake, which is very very special." Virat Kohli Reveals His Mother’s Concerns While Following Fitness Regime.

From baking for his special someone in the lockdown to revealing the best smoothie makers in the team, @imVkohli answers it all on #OpenNetsWithMayank.

Virat and Anushka have been very active on social media during the COVID-19 induced break and have been constantly giving their fans major couple goals. In fact, on Anushka’s birthday, Virat posted a pic in which the cute couple can be enjoying a cake and it seems like it’s the same dish the right-handed batsman was talking about.

You my love bring light into this world. And you light up my world everyday. I love you ❤️ pic.twitter.com/nhYYr0CjDs

Meanwhile, Virat must be preparing himself for the 2020 edition of the Indian Premier League (IPL) where he leads Royal Challengers Bangalore (RCB). IPL governing council chairman Brijesh Patel recently announced that the T20 tournament will begin on September 19 while the finals will be played on November 8.

(The above story first appeared on LatestLY on Jul 27, 2020 05:08 PM IST. For more news and updates on politics, world, sports, entertainment and lifestyle, log on to our website latestly.com).