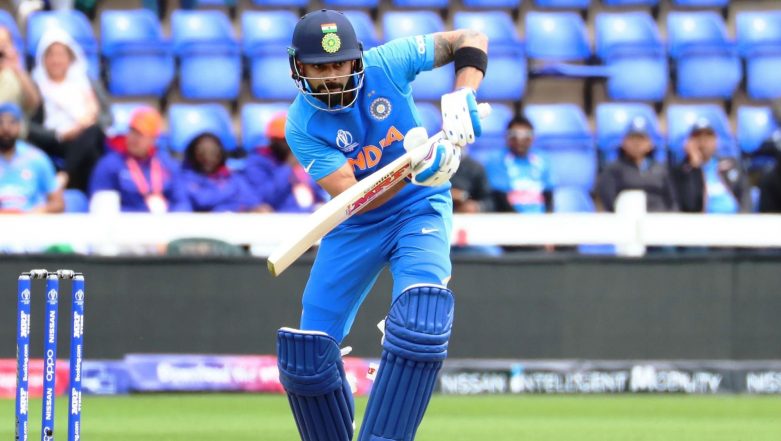 Virat Kohli in action during the second warm-up match between India and Bangladesh. (Photo Credits: IANS)

New Delhi, May 29: "I am glad with what we got out of these two games," said Virat Kohli after the second warm-up match against Bangladesh which his side won comfortably by 95 runs. But was it really the case?

In the first practice match, the famed Indian batting line-up struggled before the pace and swing of New Zealand bowlers, especially Trent Boult who wreaked havoc and picked up four wickets on May 25 in challenging batting conditions at Southampton. Apart from Ravindra Jadeja, none of the Indian batters managed to stay for long at the crease and as a result the Men in Blue were bundled out for mere 179 inside 40 overs which the Black Caps chased down without any hiccups. India vs Bangladesh, ICC Cricket World Cup 2019 Warm-up Match: KL Rahul's Ton at Number Four 'Biggest Positive', Says Virat Kohli.

In the second match as well, the Indian top-order failed to perform as per expectations and didn't seem to be in total control of their game. It was only K.L. Rahul and M.S. Dhoni, who managed to make the most of their batting as they scored brilliant hundreds to help India post a mammoth 360-run target, which it successfully defended against Bangladesh.

Keeping aside those two knocks and the quickfire 46-ball 47 from Kohli, it was again a case of conditions making the batsmen sweat. ODI deputy Rohit Sharma, who had scored just two runs against the Kiwis, managed 19 against the Bangladesh. He was seen struggling before the pace and swing of Boult, as well as that of Mustafizur Rahman.

Same was the case with Shikhar Dhawan who managed scores of 2 and 1 in both the warm-up matches. The much spoken about Vijay Shankar also managed just 2 on Tuesday as the Indian scoreboard read a scary 102/4 at one stage. But the 164-run partnership between Rahul (108) and Dhoni ensured that another embarrassing collapse was avoided.

However, Kohli doesn't appear much bothered by the form of his 'star openers'. "Shikhar and Rohit are quality players. They become stars in ICC events. I understand if guys don't get going rightaway in this format, but I am glad with what we got out of these two games," the skipper said on Tuesday.

When it comes to bowling, the Indian bowlers didn't have much to defend against the Black Caps. But still, they put up a good show, especially Jasprit Bumrah who was magnificent with his line and length. He bowled at a brisk pace and returned with figures of 2/4 from the four overs he bowled. Against Bangladesh as well, the no. 1 ODI bowler didn't let go off the guard and kept on creating problems for the batters, especially Litton Das, who struggled a lot against the inswinging deliveries from Bumrah.

The lanky Indian pacer picked two wickets for 25 runs in his five overs and rang warning bells for the opposition teams going into the World Cup. The highlight of Bumrah in both the matches was the two yorkers he bowled to get wickets of Colin Munro and Shakib al Hasan.

Another positive aspect of the Indian bowling attack was the performance of their spin dual -- Yuzvendra Chahal and Kuldeep Yadav. Both of them scalped three wickets a piece and showed their importance, both in terms of picking wickets and putting a brake at the scoring rate. Bhuvneshwar Kumar and Mohammad Shami bowled within themselves in both the games and looked in good rhythm.

Going into the first match against South Africa to be played on June 5, the Indian top-order, especially the openers will have to come to the party and make sure they provide the team with a solid start and lay the platform for Kohli and others to post big totals on the flat English decks.