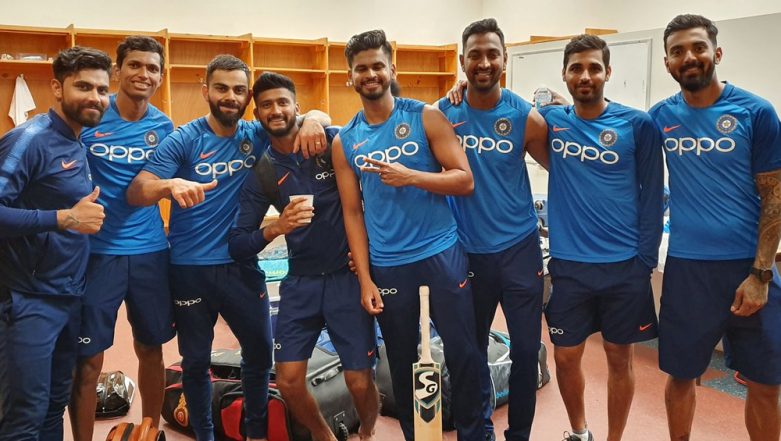 New Delhi, Aug 2: The Indian cricket team has arrived in the US for the upcoming three-match T20I series against the West Indies which starts from Saturday. Players have been taking to their social media handles posting pictures of themselves while practising and enjoying in Florida. On Friday, skipper Virat Kohli also posted a picture with his teammates on Instagram with a caption "SQUAD". In the picture, Ravindra Jadeja, Navdeep Saini, Khaleel Ahmed, Shreyas Iyer, Krunal Pandya, Bhuvneshwar Kumar and K.L. Rahul can be seen posing alongside Kohli. Virat Kohli Breaks Protocol, CoA Terms It ‘Freedom of Speech’

However, vice-captain Rohit Sharma is missing from the frame, which has once again given ammunition to people who have been speculating about a rift between Kohli and his deputy. Various fans commented on the picture asking about the absence of India vice-captain. Anushka Sharma Spotted With Virat Kohli At Miami Airport As Team India Reach US for T20Is Against West Indies, See Photo

Earlier before the departure for the West Indies tour, Rohit had also posted a photo on Instagram which said: "I don't just walk out for my Team. I walk out for my country." Ever since India's exit from the World Cup in the semifinals, there have been rumours about a rift between Kohli and Rohit. However, both Kohli and head coach Ravi Shastri have denied the reports with the India captain terming the rumours "baffling".