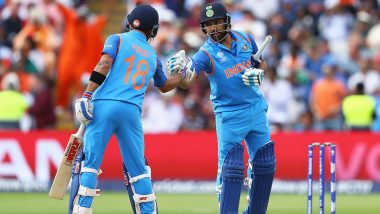 Virat Kohli and Rohit Sharma are two of the best batsmen going around and their record in international cricket is nothing but sensational. Recently, former Sri Lanka captain Kumar Sangakkara heaped praises on the Indian duo and called them the 'defining pair' of Indian cricket in the modern era. The Sri Lankan star also compared the two talismanic batsmen with former Indian greats Sourav Ganguly and Rahul Dravid. Sangakkara and talked about how Virat and Rohit are able to play aggressive cricket with orthodox and traditional shots. Virat Kohli Recalls How MS Dhoni Got Upset When He and Rohit Sharma Collided During India vs Pakistan Clash in 2012 Asia Cup.

"If you look at Rahul (Dravid) and Dada (Sourav Ganguly), both of them are orthodox batsmen. They play beautiful cricket shots and are very technically correct, Dravid may be a little bit more so, but the ability to be as destructive with such rate and precision stroke-making is something that has to be really admired,” Sangakkara said while featuring on Star Sports' show ‘Cricket Connected’.

"If you take the modern-day game, India has two of the best players in Virat Kohli and Rohit Sharma, who play orthodox cricket but who are just absolutely destructive in any format of the game. You don’t have to muscle the ball or put too much effort or look ugly doing it, they just play good cricket shots and results come," he added.

Kohli and Rohit, who currently hold the top two positions in the ICC ODI batting rankings, have numerous prestigious records under their belt. Kohli, who has already scored 70 hundred in international cricket, is touted to go past his idol Sachin Tendulkar’s tally of 100 international centuries while Rohit is the only batsman to scored three double centuries in ODIs and four tons in T20Is.

Sangakkara further praised the consistent performances of the Indian pair in all the three formats of the game. "There is something very special about Virat and Rohit. That fact that rules have changed and maybe run-scoring might have become slightly easier in one-day cricket, but the fact remains that to be so consistent across all formats, he’s so consistent in T20 cricket,” said the second-highest run-scorer in ODI cricket.

"It’s incredibly hard, the volume of cricket that India athletes play. So, I think you have to have a lot of respect for Rohit and Virat but understand that it’s all because of the players that have gone before and have done all the hard work then as well. So, it’s a knock-on effect, so in every era, there’s always a defining pair and in the modern era, its Rohit and Virat for India for sure," concluded Sangakkara.

(The above story first appeared on LatestLY on Jun 02, 2020 11:42 AM IST. For more news and updates on politics, world, sports, entertainment and lifestyle, log on to our website latestly.com).