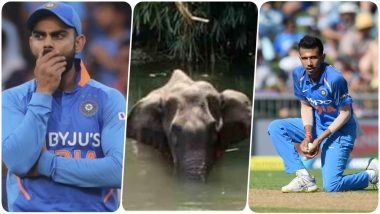 Virat Kohli is appalled to hear about the death of the pregnant elephant in Kerala and has posted a tweet about the same. In his tweet, he said that we need to put an end to cowardly act like these.  Even Indian spinner Yuzvendra Chahal took to his Instagram story to condemn the act. Since the last two days, the death of the pregnant elephant has caused a massive furrow on social media. The netizens are quite aghast with the act as the pregnant elephant was fed with pineapples which had firecrackers in it. The 15-year-old animal died in the middle of the river and the Forest Officer of Kerala is looking out for the culprits. Horrific Animal Abuse! Pregnant Elephant Dies After Being Fed Pineapple Filled With Firecrackers in Kerala's Malappuram District.

Virat Kohli has also raised his voice and shared a snap of the pregnant elephant in the middle of the river. In the caption, he also urged the people to treat animals with love. “Appalled to hear about what happened in Kerala. Let's treat our animals with love and bring an end to these cowardly acts,” he captioned the snap.  Let’s have a look at the post by Virat Kohli and Yuzi below:

Appalled to hear about what happened in Kerala. Let's treat our animals with love and bring an end to these cowardly acts. pic.twitter.com/3oIVZASpag

The netizens are quite sad and have been demanding action from the authorities. Even Anushka Sharma urged the Chief Minister of Kerala to take strict action and punish the culprits. Apparently the firecracker exploded in the mouth of the pregnant elephant and damaged her jaw. She walked around the village and finally passed away standing in a river.

(The above story first appeared on LatestLY on Jun 03, 2020 08:38 PM IST. For more news and updates on politics, world, sports, entertainment and lifestyle, log on to our website latestly.com).