VIVO IPL 2019, MI vs SRH: Mumbai Indians in Playoffs After Super Over Win vs Sunrisers Hyderabad 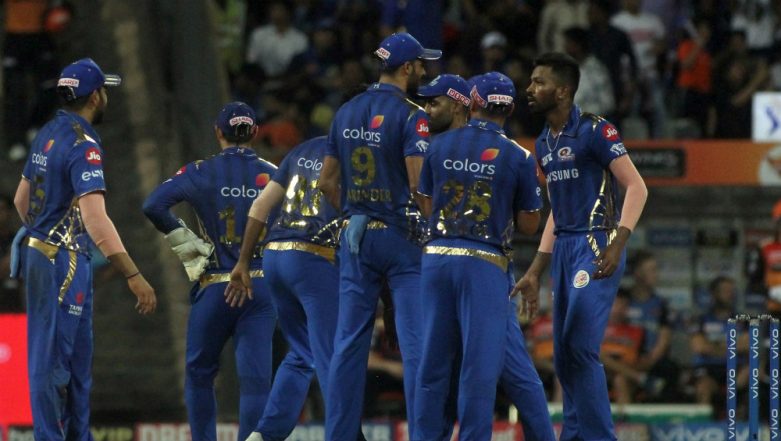 Mumbai, May 3: In yet another nail-biting clash of the Indian Premier League (IPL), three-time champions Mumbai Indians held its nerves to become the third team to qualify for the playoffs after defeating Sunrisers Hyderabad in the Super Over at the Wankhede Stadium here on Thursday.

It was Manish Pandey's 'never give up' effort which helped Hyderabad, who were chasing a 163-run target, tie the score and take the contest to a Super Over. However, Hyderabad could only manage eight runs before Mumbai overhauled the target with ease and three balls to spare. MI tied with SRH (MI win Super Over by 2 wickets) | Mumbai Indians vs Sunrisers Hyderabad Live Cricket Score 51th T20 Match.

Earlier, Pandey's (71 unbeaten off 47) last-ball six denied Mumbai a thrilling win as his fighting knock along with Mohammed Nabi's valuable (31 off 20) effort helped Hyderabad level the score in the stipulated 20 overs.

Pandey, whose scintillating knock was laced with eight boundaries and couple of sixes, kept his side on hunt as he kept one end intact despite Mumbai jolting the visitors at regular intervals in the first 15 overs.

Chasing the 163-run target, Hyderabad openers Wriddhiman Saha (25 off 15) and Martin Guptill (15 off 11) handed a fine start as the visitors raced away to 30 runs in the first three overs. Jasprit Bumrah came with the first breakthrough for Mumbai, sending back Saha in the fourth over.

Just when the hosts added another 17 runs, Bumrah struck again to account for the other Hyderabad opener in the sixth over, leaving them at 57/2. Krunal Pandya was then successful in making further inroads in the visiting batting line-up as he claimed Kane Williamson (3 off 7) soon, which reduced Hyderabad to 65/3.

Krunal struck again to dismiss Vijay Shankar (12) while his brother Hardik Pandya also joined the party, sending back Abhishek Sharma (2) cheaply, which left the visitors reeling at 105/5 in 14.3 overs.

Despite the blows, Pandey kept his wicket safe and was later involved in a crucial 49-run partnership with Nabi. The duo not only denied Mumbai making any further onslaughts but also helped their side touch the 150-run mark in 19.3 overs.

Just when it seemed the duo would easily drive their side home, Hardik came with a twist in tale as he sent back a good-looking Nabi with two balls left.

With eight needed of the final two deliveries, Pandey took a couple in the second last delivery before slamming Hardik for a maximum at long-on to keep the contest alive.

Despite getting little support from the other end, de Kock kept his cool and helped the three-time champions reach a respectable total. The opener's knock contained six boundaries and two hits into the stands.

Opting to bat, Mumbai were off to a decent but cautious start with the scoreboard reading 26/0 in the initial three overs. While Rohit Sharma (24 off 18) clobbered Hyderabad bowlers, de Kock played second fiddle to the Mumbai captain.

Khaleel drew the first blood for his side and sent back a dangerous looking Rohit in the sixth over, leaving Mumbai at 36/1. The Mumbai skipper played an overambitious pull shot on a delivery that bounced a bit more and popped up in the air only to be caught by Nabi at mid-on.

Incoming batsman Suryakumar Yadav (23 off 17) and de Kock then tried to repair the early damage, adding 54 runs for the second wicket. Just when the home side was approaching the three-digit mark, Khaleel struck again to break the partnership. He cut short Suryakumar's stay in the middle, reducing Mumbai to 90/2 in 11.2 overs.

Nabi spelled further trouble for Mumbai and just after the addition of a run, he packed back Evin Lewis (1 off 6) in the 13th over.

Hardik then played a quick 10-ball 18, with the help of a four and a six. But the Mumbai all-rounder failed to spend much time in the middle as Bhuvneshwar Kumar applied brakes on his innings in the 16th over, with Mumbai placed at 119/4.

Kieron Pollard (10 off 9) and de Kock then shared a short 32-run partnership for the fifth wicket, helping their side cross the 150-run mark in 18.5 overs. Pollard was dismissed in the final over by Khaleel before Krunal Pandya chipped in with an unbeaten 9 off three balls as Mumbai reached a fighting total.

For the visitors, Khaleel bagged three wickets for 42 runs and Bhuvneshwar and Nabi got one wicket each.