One of cricket's greatest batsmen, VVS Laxman turns 46. Laxman was born on November 01 in Hyderabad, Andhra Pradesh. The stylish right handed batsman referred to by man as ‘Very Very Special Batsman’ played the most the exquisite shots while sticking to his orthodox game during a 16-year career at the highest level for India. 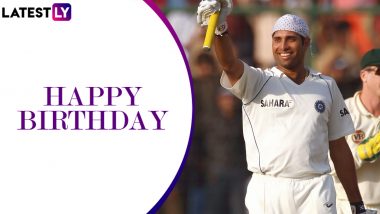 One of cricket's greatest batsmen, VVS Laxman turns 46. Laxman was born on  November 01 in Hyderabad, Andhra Pradesh. The stylish right handed batsman referred to by man as ‘Very Very Special Batsman’ played the most the exquisite shots while sticking to his orthodox game during a 16-year career at the highest level for India. What made the batsman special was his tendency to perform when the chips were down. His ability to wage lone battles was second to none in test cricket in particular and during a time where every team had two or three world class bowlers, the Hyderabad batsman managed 8781 runs in 134 tests and 2338 in 86 ODIs. Today, VVS Laxman is mentor of Sunrisers Hyderabad (SRH) team in the Indian Premier League (IPL) and a noted cricket commentator whose inputs are welcomed by everyone. On his 46th birthday, we take a look at his top 5 test knocks. VVS Laxman Recalls Sachin Tendulkar’s ‘Sharjah Desert Storm’ Knock on Visiting Stadium With SRH Ahead of IPL 2020, Master Blaster and Yuvraj Singh Respond.

The game that made VVS Laxman the legend that he is in world cricket. India were down and out after being forced to follow in the second test in Kolkata. Laxman stuck a partnership with Rahul Dravid to turn the contest on his head. He stuck 44 boundaries on his way to a 452 ball 281 and with the help of Harbhajan Singh, India scripted a memorable victory.

Struggling with a sore back, VVS Laxman the fighter that he is refused to give up to score an unbeaten 73 and secure a narrow 1 wicket win against Australia. India were chasing 216 on a Mohali wicket that was offering something to the bowers and at one stage the team was 124-8 in its chase. But then the magic of VVS Laxman left everyone mesmerised as he stuck partnerships with Ishant Sharma and Pragyan Ojha to drag India across the finish line.

VVS Laxman loved playing against the Australians and this double century in Delhi bears testimony to the fact. He dominated the Aussies from the onset on a flat wicket to bring up a second double century of his career. The match though ended in a draw with the visitors responding well to India’s mammoth score. Harbhajan Singh and VVS Laxman Used to Trouble Us a Lot, Says Adam Gilchrist.

India arrived in Australia in 2003 under the leadership full of Saurav Ganguly looking to win their first series win in India. In the second test in Adelaide, VVS Laxman scored 148 and with his pal Rahul Dravid batting alongside him, India responded well to Australia’s 556 with 523. When VVS walked into bat, the visitors were struggling at 85-4 but then their fortunes changed. The knock proved crucial as India won the game.

This innings is a special in many sense for VVS Laxman as it helped India secure a memorable victory in the controversial 2008 Australia tour. The Hyderabad batsman managed 79 in 156 balls to help India set the hosts a mammoth target of 413 runs. The Australians folded out for 340 in the 4th innings with his runs proving to be the difference between a good target and a winning target.

On behalf of team Latestly, we wish the champions batsman a very happy birthday.

(The above story first appeared on LatestLY on Nov 01, 2020 07:55 AM IST. For more news and updates on politics, world, sports, entertainment and lifestyle, log on to our website latestly.com).