"From an idealistic point of view, it (WTC) probably had a lot of merit, but I do disagree on whether in practice it has achieved what it was intended to do. My personal view is: let's get through the little bit that we can taking into account -- (the break induced by) Covid-19 and the ability to reallocate points," he said. 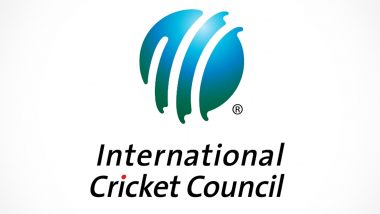 The ICC recently introduced points system that ranks teams on percentage of points (PCT) instead of the overall points earned, after several series/matches could not take place due to Covid pandemic around the world. ICC World Test Championship 2019–21 Points Table Updated: Australia Jump Past India to Claim Top Spot as ICC Announce Altered Grading System.

"Some of the issues that we have already got around the calendar, I do wonder whether they came from adjusting and attempting to develop a Test Championship, which was clearly designed to drive interest back into Test cricket," Barclay, who took over the ICC reins on Wednesday, said during a select virtual media interaction.

Barcley, 59, said his personal view is that once the WTC is completed the ICC could go back to the drawing board and review its structure taking everything into consideration.

"From an idealistic point of view, it (WTC) probably had a lot of merit, but I do disagree on whether in practice it has achieved what it was intended to do. My personal view is: let's get through the little bit that we can taking into account -- (the break induced by) Covid-19 and the ability to reallocate points," he said.

"...once we've done that we would probably go back to the drawing board to have a look as I am not just quite sure that it has entirely served the purpose and perhaps achieved what we might have achieved when it was conceptualised four-five years ago," said Barclay, a qualified lawyer.

On Thursday, Kohli had lashed out at the ICC for "suddenly" changing the points system of WTC matches that will determine which two top teams would qualify for the final next year.

"It is definitely surprising because we were told the points are the matter of contention with the top two teams qualifying. Now, suddenly, become percentage out of nowhere. It is very confusing, very difficult to understand why. If such a thing had been told to us from day one, then it would have been easier for us to understand. But it happened out of nowhere. For further questions, ICC should be asked why this has been done and what are the reasons behind this," said Kohli. The Anil Kumble-headed ICC Cricket Committee proposed the switch to PCT before the ICC Board approved it on November 20.

"The unprecedented disruption caused by COVID-19 means, to date, just under half of the World Test Championship matches have been played, with that estimated to rise to more than 85% by the end of the competition window. Current regulations dictate that matches not completed shall be treated as a draw with points split. The Cricket Committee considered maintaining that status quo or determining the final World Test Championship League standings from matches played," the ICC had said in a statement. On the issue of amalgamation of T20 leagues and bilateral cricket into the ICC calendar, Barclay indicated that all should co-exist.

"All forms of cricket need to be taken into account when we are looking at a calendar. The calendar is becoming incredibly congested and, quite frankly, something has to give in somewhere. There has got to be compromise to make it all work. I do respect that each country has a complete right to develop its own domestic competition, and as long as it is meeting with ICC requirements then it should be properly and appropriately sanctioned by the ICC," said the Hamilton-born Barclay.

"So I don't have any problem with the professional leagues. Clearly, there is a demand from the playing point of view, as well as fans and commercial point of view. Let's accept that domestic cricket leagues are here to stay and they have been incredibly contributing to the growth of interest in cricketers. They are entertaining products that is produced, if you look across the more established ones like the Indian Premier League, the Big Bash League, and the Caribbean Premier League," he said on the issue of availability of players for their countries and T20 leagues.

(The above story first appeared on LatestLY on Nov 30, 2020 07:41 PM IST. For more news and updates on politics, world, sports, entertainment and lifestyle, log on to our website latestly.com).