F1 2020 Season Could Be Delayed Until June’s Baku Grand Prix Due to Coronavirus Outbreak: Reports

The Chinese GP, which was set to take place on April 19, 2020, is already cancelled with China suffering the most from the Coronavirus pandemic, which has since claimed over 3000 lives while also affecting over a lakh people in the entire country. Formula One could be forced into waiting until the Baku Grand Prix to start the F1 season. 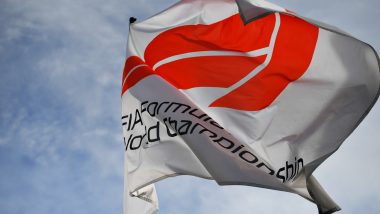 Days after calling off the Australian Grand Prix due to the rising effect of Coronavirus, reports claim that the 2020 season of Formula One, which was suspended until further notice, will not start until the month of June. The Australian GP was called-off last Friday after a McLaren team member tested positive for COVID-19 in Australia. The entire team was then sent in quarantine throwing the entire season of F1 into jeopardy. Reports, however, state that season could now start with the Azerbaijan GP in June at Baku, while the tournaments prior to it will be either called off or postponed. As many as six Grand Prix’s are held before the one in Baku, which includes the Monaco GP and Vietnamese Grand Prix. Lionel Messi Speaks Out on Coronavirus, Calls for Everyone ‘To Be Responsible and Stay at Home’ in These ‘Complicated Days’ (Read Full Statement).

According to reports in Autosport, the F1 could be compelled into calling off the Vietnamese Grand Prix in Vietnam with things getting worse in the country due to the COVID-19 outbreak. The Bahrain GP, which was scheduled to start later this month is also bound to be postponed with McLaren sending their entire team in quarantine after one of their team members tested positive for the epidemic.

Things are also bound to get worse it Europe – Italy had already a state lockdown and Spain in on verge of declaring one – which means that the Dutch, Spanish and Monaco Grand Prix would have to be postponed or called off. All these countries, including Vietnam and Bahrain, have already announced travel restrictions making it extremely complex to hold any sporting events even in empty tracts and without the presence of a single spectator.

The Chinese GP, which was set to take place on April 19, 2020, is already out of the contention with the state suffering the most from the pandemic. Coronavirus first originated in the Wuhan city of China and has since claimed over 3000 lives while also affecting over a lakh people in the entire country. Formula One, therefore, could be forced into waiting until the Baku Grand Prix to start the F1 season.

The report further quoted F1 CEO Chase Carey saying “At this point, our focus really is dealing with the issues this weekend. Clearly, I just came in from Vietnam, so we are in discussion with partners on the upcoming races. I think at this point what we really want to do is make sure we deal with the issues here, deal with them properly,” he said.

"But in the coming days, clearly we will be addressing the events yet to come. It's a pretty difficult situation to really predict - everybody uses the word fluid, it is obviously a fluid situation. The situation today is different than it was two days ago, which is different than it was four days ago. So trying to look out and make those sorts of predictions when it's changing this quickly is challenging."

(The above story first appeared on LatestLY on Mar 15, 2020 06:31 PM IST. For more news and updates on politics, world, sports, entertainment and lifestyle, log on to our website latestly.com).