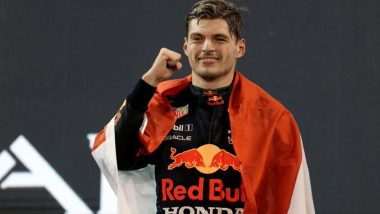 The FIA, governing body of Formula 1 has admitted that the recent turn of incidents at the Abu Dhabi Grand Prix 2021 is tarnishing the image of the sport. They have also promised to investigate the controversy. The final lap of the Abu Dhabi Grand Prix 2021 had quite a controversial outcome with Max Verstappen winning the Formula 1 Championship. Lewis Hamilton who was eyeing his eighth Formula 1 Championship win, stood second.  This evoked reactions from the racers and also a lot of fans. Lewis Hamilton’s Father Anthony Congratulates Max Verstappen & His Dad, Formula 1 Shares Video of ‘Class Act' on Social Media.

In fact, eminent personalities like Gary Linker, Sachin Tendulkar, Rohit Sharma and others had reacted to the win. Many even went on to slam FIA for the way things panned out. Thus they issued a  statement and said that FIA President Jean Todt has, "proposed to the World Motor Sport Council that a detailed analysis and clarification exercise for the future with all relevant parties will now take place."  The statement was also posted on social media.

Lewis Hamilton was eyeing to surpass Michael Schumacher's record of winning eight titles. On the other hand, Max Verstappen won his first title at the Abu Dhabi Grand Prix. Needless to say, Hamilton was quite disappointed with the result but despite that, he walked up to the Dutch racer to congratulate him. His father Anthony also congratulated Verstappen. The videos were shared by the official account of Formula 1.

(The above story first appeared on LatestLY on Dec 16, 2021 10:03 AM IST. For more news and updates on politics, world, sports, entertainment and lifestyle, log on to our website latestly.com).